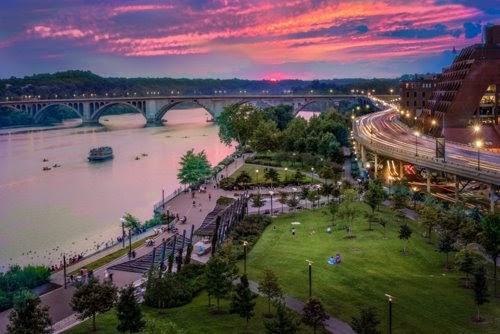 This view of Georgetown Waterfront Park in Washington, DC shows many of the kinds of green and grey infrastructure included in this really big deal.
Credit: Georgetown BID

Almost everyone agrees that our nation desperately needs major investments in repairing and rebuilding our infrastructure of roads, bridges, airports, transit systems, waterways, and railroads. Major investments in water delivery and treatment systems, energy facilities, ports, and environmental remediation also are due. While the need for these investments is clear, the price tag is daunting, and the question of how to pay for this work sets up a storm of partisan conflicts.

Both the current and previous administrations announced ambitious intentions to address infrastructure investments, but until recently have been unable to find an agreement. As of August 2, 2021, there seems to be good reason for hope that the Senate will approve a $1 trillion infrastructure and jobs bill.

The $1 trillion number grabs the headlines, but a more accurate description is that it includes $550 billion in new funds and renews several existing transportation and infrastructure programs that would otherwise expire at the end of September this year. That’s still a lot of money, but far less than what the administration initially proposed, especially for clean energy projects, lead pipe replacement, transit and measures targeted to historically underserved communities.

The text of the bill extends to more than 2,700 pages, so finding out exactly what is included will take a while. However, $238 million under the heading of ecosystem restoration for the EPA’s Chesapeake Bay program is clearly identified. Over five years, that amount would be about a 50% increase or $47.6 million over current funding levels. Unless there is some detail buried in the legislative history, EPA will have pretty wide discretion on how these additional funds will be allocated.

A reasonable guess is that EPA will focus on steps to have pollution reduction practices in place to meet the 2025 deadline for total maximum daily load (TMDL). Priority attention will likely be given to projects and programs to reach the specific outcomes identified in the 2014 Chesapeake Bay Watershed Agreement. 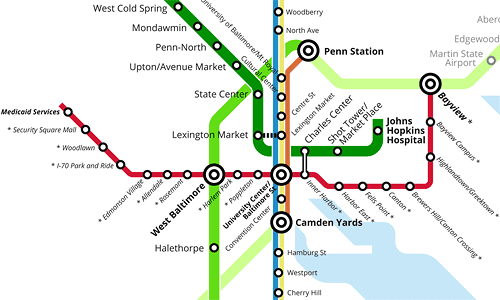 The hope is that building infrastructure, like the proposed Baltimore Red Line pictured here, will create jobs in the short term but also connect residents, especially in underserved communities, with stable jobs.
Credit: Peter Dovak 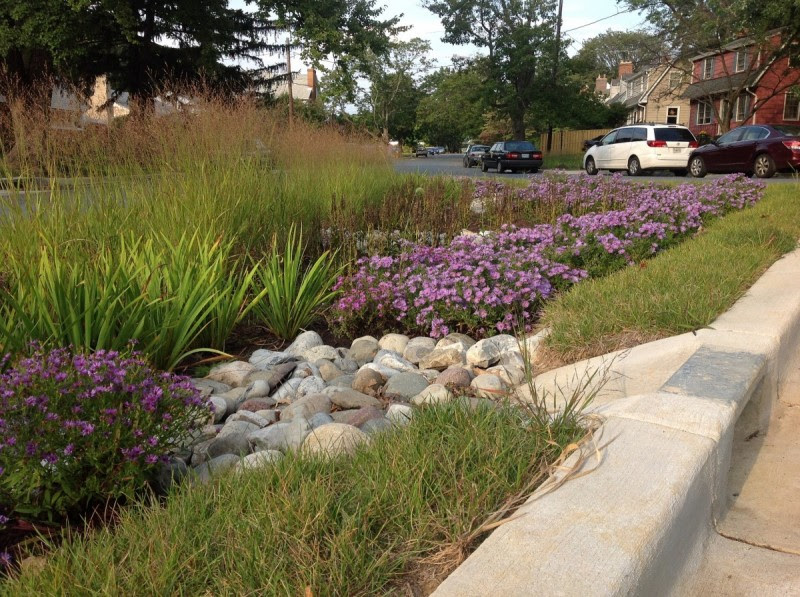 Now would be a good opportunity for considering potential uses of the additional funding for bay restoration that could reach beyond direct improvements in water quality. These might include, for example, road stream crossings in need of upgrades where culvert replacements would improve fish passage. Coastal wetlands could be restored to provide essential buffers in key places where they would protect coastal communities that are most vulnerable to intense storms and rising seas. Planning for other projects could assure that green infrastructure is included in the design from the beginning, accommodating tree planting best practices that will serve goals for urban canopy, storm water, and ecosystem function.

These funds also could supplement other sources to enhance better access to the Bay and public open space. Ideally, the increased funding will be used not only to enhance current programs but also to leverage and collaborate on innovative ways to achieve the outcomes adopted in the watershed agreement.

The Bay restoration effort also could get additional help from the bill’s proposal to boost funding nationally for water and wastewater infrastructure. As highlighted in a report by the Bay Journal, EPA programs that provide loans to states for upgrading sewage and stormwater treatment facilities and for enhancing drinking water systems each would get an additional $14.7 billion over the next five years, more than double the current annual level of funding for such projects.

The Port of Baltimore is a major driver of the Chesapeake economy and highly critical infrastructure.
Credit: Wikimedia Commons

The full text of the infrastructure bill includes several other provisions that are not specified for the Chesapeake watershed but might very well support work in our region. For example:

Hopefully the bill will be enacted, and treasure seekers will find even more opportunities to recognize that the Chesapeake Bay is the heart of the green infrastructure that supports our region.