Last week we featured how little attention was given to climate change by broadcast media in 2020. As conservationists, we often recognize the importance of considering climate and other environmental issues on the landscape or watershed scale. Not so often do we look at how other sectors are factoring climate change in future scenario planning. This week, we take a dive into national intelligence, not our usual gig.

The report finds a world unsettled by the coronavirus pandemic, and observes that the ravages of climate change will propel mass migration and a widening gap between what people demand from their leaders and what they can actually deliver. Our future can be anticipated by considering five major themes: global challenges, fragmentation, disequilibrium, contention and adaptation.

The report highlights familiar concerns about the environment: the physical effects of climate change including more extreme storms, droughts, and floods; melting glaciers and ice caps; and rising sea levels accompanied by higher temperatures. The impact is expected to fall disproportionately on the developing world and poorer regions and intersect with environmental degradation to create new vulnerabilities and exacerbate existing risks to economic prosperity, food, water, health, and energy security.

The relationship between climate change and environmental degradation as drivers eroding human security is displayed graphicly in Global Trends 2040, as shown to the right. The report contains a number of other helpful graphic depictions. 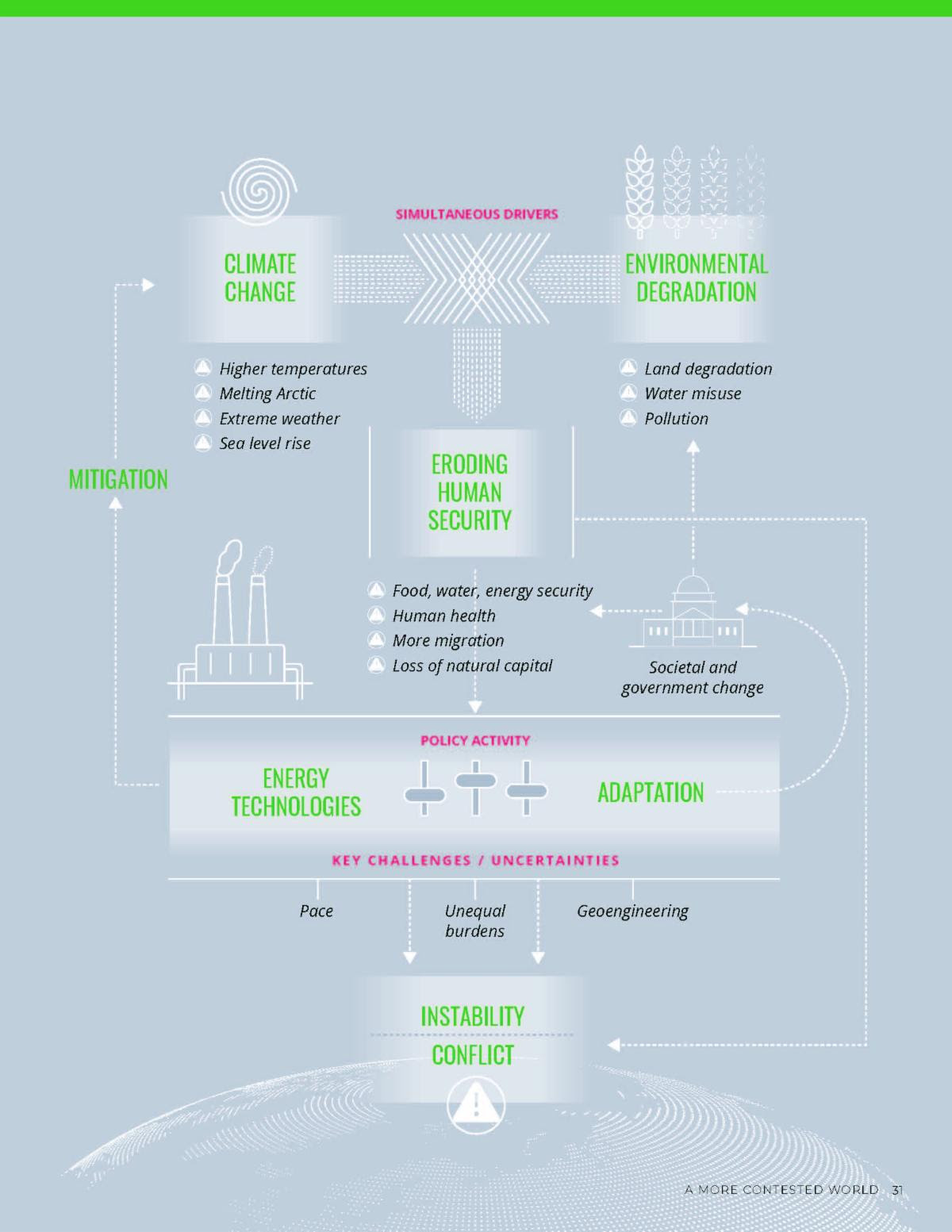 Suspicion about the capability of government at all levels is not a uniquely contemporary American phenomenon. Large segments of the global population are becoming wary of institutions and governments they see as unwilling or unable to address their needs. The report observes that ”the effects of the pandemic will linger, and could shape future generations’ expectations of their governments, particularly as a warming world leads to new human conflicts, including, in the most dire scenario, global food shortages that spawn mass violence.” 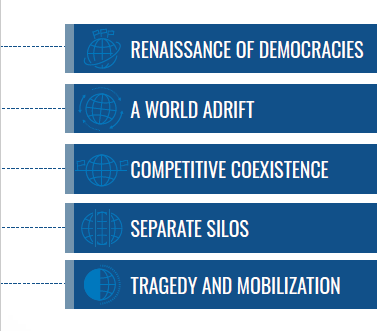 So, what’s the future look like? The National Intelligence Council imagines five scenarios on a sliding scale that may help tell us where the world is turning as we approach 2040. Most of these seem pessimistic, but the report suggests the forces shaping the world “are not fixed in perpetuity.” Countries that exploit technology and planning, particularly those that plan ahead for the seemingly inevitable consequences of climate change will be poised to best manage the crisis.

This type of scenario planning can and should be applied at the regional and local scales to inform our work in the Chesapeake watershed. We should be especially aware of the potential for unexpected changes in the major forces that drive our environment, economy and society.

Global Trends 2040 observes: “ultimately, the communities and societies that succeed will be those that can adapt to change, but also forge social consensus around what should be done.” That may be the biggest challenge ahead for our region and the planet.