It’s always worth considering whether we have faced similar situations before and, if so, how we handled them.

The climate crisis of today is unprecedented in scale. But it is not the first enormous environmental crisis conservationists have faced. Nor are some of the solutions employed in past crises unlike those being called for today — plant trees; a lot of them.

As a response to the twin crises of the 1930s–the Dust Bowl and the Great Depression–the federal government carried out a massive tree-planting program in the Great Plains. The idea, personally advocated by Franklin Delano Roosevelt and planned and coordinated by the US Forest Service–was to create shelterbelts of trees from Canada to Texas to slow wind erosion and increase soil moisture. 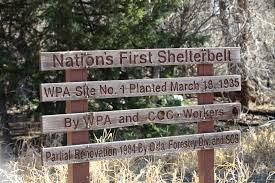 In 1938, the peak year of the “Prairie States Forestry Project”, 4,266 miles of shelterbelts were planted. Survival rates of planted trees reached 80% in some of the most drought-stricken regions. By 1942, the last year of the project, 30,233 shelterbelts had been planted, containing 220 million trees stretching over 18,600 miles on the Great Plains. In 1954, the Forest Service surveyed the area and found that 73% of trees were still surviving.

As is still so common with environmental solutions today, the project was controversial at first. Some believed it wouldn’t work. Others argued it was a make work project. Congress was not supportive. There was concern about federal-overreach. Read this description of how local engagement helped turn the tide:

“By the autumn 1937, the Forest Service had also moved to eliminate the perception that it arbitrarily told landowners where the shelterbelts had to be planted. In Kansas, for example, project officials worked with the county agents … to appoint township tree committees. These committees had the responsibility to develop plans that would benefit the local community as well as the farmer. Township tree committees developed and mapped ideal shelterbelt locations and encouraged landowners to participate in the project. By late 1938, 141 township tree committees had been organized in twenty counties, and by the end of 1940, 240 township committees had been formed in Kansas. These committees played an important role in planting 6.4 million trees on 1,286 farms … during the spring of 1939, the most extensive planting season in the state. Absentee owners of Kansas farmland, who lived in Pennsylvania, Missouri, Illinois, and California, now applied for shelterbelts, because the trees planted in 1935 and 1936 already helped check moving soil. By the end of the decade, landowners in sixty-nine Kansas counties participated in the program and approximately 10.4 million acres had been planted in shelterbelts.” Read more details here.

The shelterbelt project is considered one of the largest, most cost-effective conservation projects in the nation’s history. Sadly, it has gained renewed attention in the past few years as the original shelterbelts are increasingly being removed to make room for modern industrial-scale agriculture.

On the other hand, the project stands as an example of what can be done in the face of a major crisis. There are now calls for action and projects that sound similar: Australia has announced it will plant 1 billion trees by 2030 to meet climate goals; in Africa there is the Great Green Wall initiative to restore 100 million hectares; and more.

What can we learn from the past and from around the world to address the global and Chesapeake conservation challenges we face?