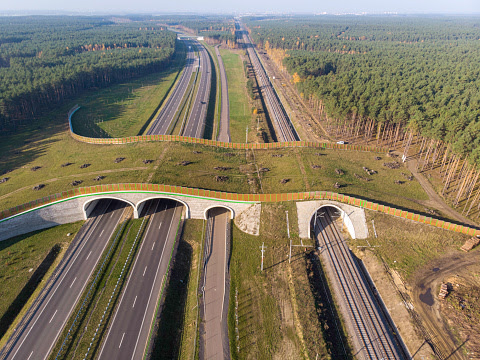 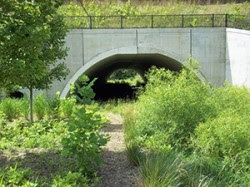 Imagine motoring down the road and being confronted by a very large animal with formidable antlers. This might seem like the opening scene for a story about nature’s revenge for all the little creatures that have been flattened by speeding cars and trucks over the years. You might think that such encounters are routine in Montana, Colorado or Wyoming, but they also take place throughout the Chesapeake watershed. White-tailed deer are plentiful throughout the region and a population of elk is thriving in north central Pennsylvania. Other large and small animals are threatened by traffic on the roadways that fragment their habitat.

With sad news fresh on our minds from the very end of 2021 of the passing of two phenomenal leaders in the realm of biodiversity, E.O. Wilson and Tom Lovejoy, we want to revisit the important topic of assuring safe corridors for wildlife as one tool in the approach to protecting diversity of species. Nationally, collisions between wildlife and vehicles kill more than one million large mammals, innumerable smaller ones, cause hundreds of human fatalities and over 26,000 injuries costing Americans in the range of $8 to $9.7 billion annually.1 Less obvious and more difficult to quantify, our road system fragments natural lands and creates barriers to daily and seasonal movement of wildlife seeking to find food and water, breed or adapt to climate change.

Fortunately, there are practical solutions to conflicts between animals and our road system. As observed by the Center for Large Landscape Conservation, “properly sited wildlife crossings can pay for themselves where situated along highways that experience a substantial number of collisions between motorists and deer or other large animals. In many circumstances, it actually costs society less to solve the problem of wildlife vehicle collisions than it costs to do nothing.”

Wildlife crossings are just one facet of habitat connectivity and have multiple benefits. Enlarging existing culverts and bridges to allow for terrestrial safe passage along riparian areas not only benefits wildlife and helps to open waterway miles to migratory fish, but also makes our infrastructure more resilient to climate change and extreme weather events, such as flooding. This protects our infrastructure investments in the long-term and ultimately saves taxpayers money. Dedicating federal funding to infrastructure projects that at the same time reduce wildlife-vehicle collisions and maintain or improve ecological connections provides benefits in the form of job creation, infrastructure resiliency and sustainable natural resources. While large mammals are often the focus of attention in planning for wildlife crossings, turtles, lizards, foxes and all sorts of smaller creatures benefit from improvements that expand functional habitats. Several studies have documented that wildlife crossing structures—both above and below existing roadways—really work and have a proven track record of promoting safe passage for wildlife across highways in North America.2 For example, wildlife crossings have decreased wildlife/vehicle collisions in Virginia up to 92% when combined with exclusionary fencing.3 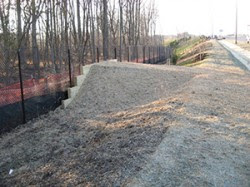 This message got through with increased federal funding to support wildlife crossings as just one of many encouraging items in the bipartisan infrastructure package that was signed into law in November 2021. The Infrastructure Investments and Jobs Act specifically establishes a “Wildlife Crossings Pilot Program” that dedicates $350 million over the next five years for projects to construct wildlife road crossings and makes projects to reduce wildlife-vehicle collisions eligible for funding under other transportation programs, including Surface Transportation Block Grants, Bridge Investment Program, Nationally Significant Freight and Highway Programs and the Federal Lands Transportation Program.

Some states already have acted to address and improve wildlife corridors and crossings. In Maryland, for example, the Intercounty Connector (ICC) won an exemplary ecosystem initiatives award from the Federal Highway Administration in 2012. From the project’s inception, wildlife passage was identified as a primary focus for the project, especially as the 18 miles of the ICC traverse multiple forested stream valleys.

In 2020, the Virginia General Assembly passed legislation calling for the creation of a Wildlife Corridor Action Plan to identify areas throughout the state that would benefit from wildlife corridors. In 2021, they went even further, building upon the 2020 legislation by directing several state agencies to incorporate the recommendations from the Wildlife Corridor Action Plan into their planning projects. In Pennsylvania, a resolution was introduced (but not adopted this past year) directing a study and report on the current status, management, and benefits of conservation corridors in the commonwealth. In Florida an unusual agreement across party lines was displayed by unanimous votes of the state House and Senate to approve the Florida Wildlife Corridor Act along with commitments of $300 million in additional funding for land protection.

Biodiversity is enhanced by creating connected ecosystems bigger than the sum of the parts. Movement across the landscape is necessary on a daily basis for food or seasonally for den sites for many animals. Young animals must disperse for their own territory. Adults need to find genetically diverse mates. Climate change now necessitates that animals migrate further north every year in order to remain in their natural habitat.4 Just as stream restorations and dam removals have expanded habitat and breeding areas for fish; road crossings can help terrestrial species thrive.

Progress toward protecting 30% of our land is inspiring and could be even more productive if preserved areas function as part of a connected habitat system that supports healthy populations of diverse species. The new infrastructure funding for corridors and crossings should help propel action and innovation for this opportunity.