This interview series highlights the people who make up the Chesapeake Conservation Partnership.  These diverse individuals have devoted their careers to conservation and share a common vision about what that can be achieved through collaboration and partnership.  Read more about how these leaders got started, where they are going next, and what drives them forward. 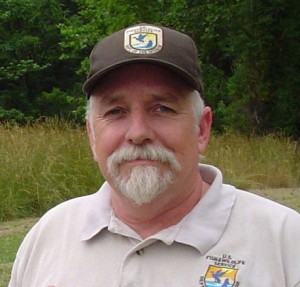 What is your current role?

I currently serve as Chief of the Division of Realty for the Northeast Region of the U.S. Fish and Wildlife Service, and formerly served as refuge manager for 4 national wildlife refuges in the Chesapeake Bay watershed in Virginia.

How did you come to be involved in conservation?

I came of age when the modern environmental movement in the United States was also in its formative stages. Historically hunters and anglers were on the front lines of conservation, along with conservation giants like Aldo Leopold, Ding Darling, and Teddy Roosevelt. But in the 1960s and 70s, the American public in general became more aware of environmental problems, such as the effects of un-regulated pesticide use (thanks to scientists like Rachel Carson). We coined a new term – “smog” – to describe the haze that fouled the air of major cities. In 1969, chemicals floating on the Cuyahoga River near Cleveland burst into flames. The first Earth Day was held in 1970, the week before my 15th birthday, and it was around that time that I set my sights on conservation as a personal practice, and later (with luck), as a career.

In your own words, please share why you think land protection is important.

Land, and the habitat it supports, is a finite resource. Although degraded lands can be restored, many times land use changes that result in the loss of fish and wildlife habitat are nearly irreversible. There always has been, and will continue to be, competition for land. We need places to live, and we need industry to support our way of life. But the majority of Americans, as borne out by survey after survey, also believe strongly that we need to have robust fish and wildlife populations as part of the fabric of our nation. We can have both, but we need to be vigilant to protect those very special places that help define us as a people. As conservation practitioners, it is our responsibility to use the latest in science and technology to identify the highest priority lands, and work with landowners and partners to conserve them for the benefit of all.

When you think about what your organization has accomplished recently, what are you most proud of?

I am proud that, despite no direct appropriations from the Land and Water Conservation Fund in 2014, we were able to protect nearly 1,200 acres at 12 national wildlife refuges in the Northeast, including a 162-acre tract at Blackwater NWR funded from the Migratory Bird Conservation Fund. I am also proud of the Northeast region for embracing the urban refuge initiative at places like Masonville Cove in Baltimore. Our leadership, from the Secretary of the Interior on down, understands the importance of reaching out to urban audiences, especially school-aged children, to make them aware of the wonders of nature that exist all around us, even in unexpected places.

What is your vision for your region (or the Chesapeake overall) in the next 5 years?

In my 30+ years with the Fish and Wildlife Service, I have not witnessed the excitement and enthusiasm surrounding Chesapeake Bay conservation as I see now and in the coming decade. The Chesapeake Conservation Partnership is poised to be a strong galvanizing force for non-profits, tribes, states, and federal agencies to combine resources to identify, prioritize, and conserve our most precious natural and cultural lands and features, and to do it on a large scale covering the entire watershed. It is ambitious, and will require considerable effort, but it is attainable.

What is your favorite destination in the Chesapeake Bay watershed? Tell us why it’s at the top of your list.

Tough call! My favorite places include Great Falls on the Potomac where I have been visiting since I was a young child, and Powells Creek off the James River where you can lose yourself in the majesty of a bald cypress swamp. My favorite though has to be the Rappahannock River near Fones Cliff. I caught my first rockfish just downstream of Fones Cliff, and I have been working to conserve that area for a large part of my career. The Rappahannock Tribe called it home long before John Smith sailed by in 1608, and bald eagles call it home today. On clear days, as the sun lowers in the west, Fones Cliff receives a final illuminating kiss, a blessing for the eagles and a reminder of work yet to be done.