Open Space for People, not Cars

Now is the time for thinking about creative solutions to public open space, including reducing the vast swaths of urban real estate dedicated to cars, not people. (Illustration: Practice for Architecture and Urbanism via New York Times)

Back in May, still in the relatively early stages of the pandemic, Lightning Update shared some early thoughts on the future of public open space. Two months later, some of the thinking around the crying need for more public spaces in cities is deepening.

By June, increasing numbers of US cities opened up streets to people and restaurants, and closed them off for cars. Here in the Chesapeake watershed, Annapolis has adopted a regular schedule of closed streets to accommodate outdoor eating and pedestrians. Baltimore is doing something similar.

But beyond these good, but small, steps, what could a re-envisioned city provide for people if we gave less space for cars? We step outside the watershed today to look at one answer to that question. Both the facts and the way the ideas for new public open space are presented merit attention.

Last week, Farhad Manjoo described a vision in “I’ve Seen a Future Without Cars, and It’s Amazing.” Manjoo’s piece in the New York Times focuses on Manhattan island, a unique place no doubt, but the rationale and the illustrations of it compelling. You will want to read this, at the very least to scroll through the visual depictions developed by the Practice for Architecture and Urbanism (PAU), a Manhattan-based architecture firm.

Here are a few of the many cogent points Manjoo makes:

Take a few minutes to read the article and see how you might be convinced.

So why is this relevant for us as Chesapeake conservationists? Even our densest cities are not Manhattan, a place with distinct advantages for moving to a carless future.

That said, dramatic change is necessary in this decade if we are to hold off the worst of climate change, make outdoor green spaces a part of everyone’s neighborhood, be more resilient in the face of pandemics, and improve quality of life in the Chesapeake watershed. Buying land alone will not achieve all of this. Innovative public policy — like an expansion of the street closures already being tested — will be needed as well. And, it will take setting out, illustrating, and communicating a vision of a better future.

Perhaps that is what is most striking about Farhad Manjoo’s piece and PAU’s illustrations, they help us envision the future. We should create such clear pictures of our own Chesapeake futures. Here’s one example: earlier this year, after a 16 months of extensive collaboration, a group of citizen’s, experts, conservationists, and city officials released a plan for a re-envisioned Annapolis downtown, moving parking away from City Dock to create public open space and address climate change. Take a look at the visuals. They’re pretty compelling too. And the first steps to move this future forward are underway. 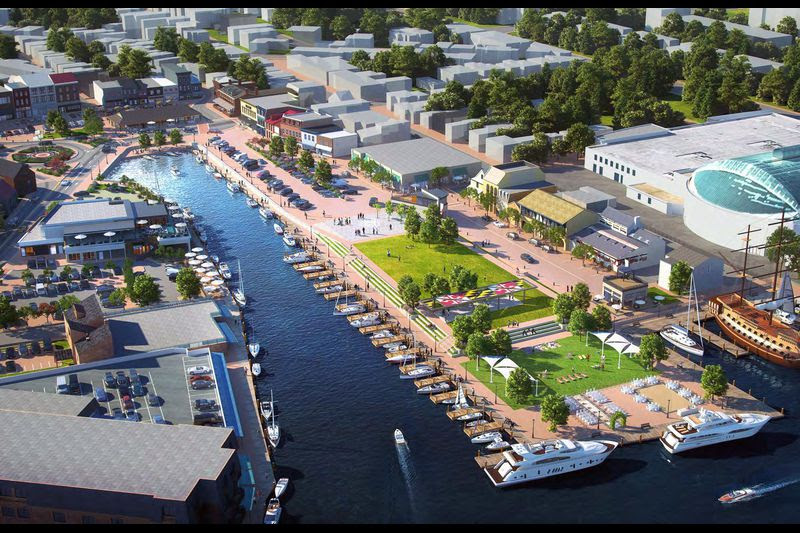