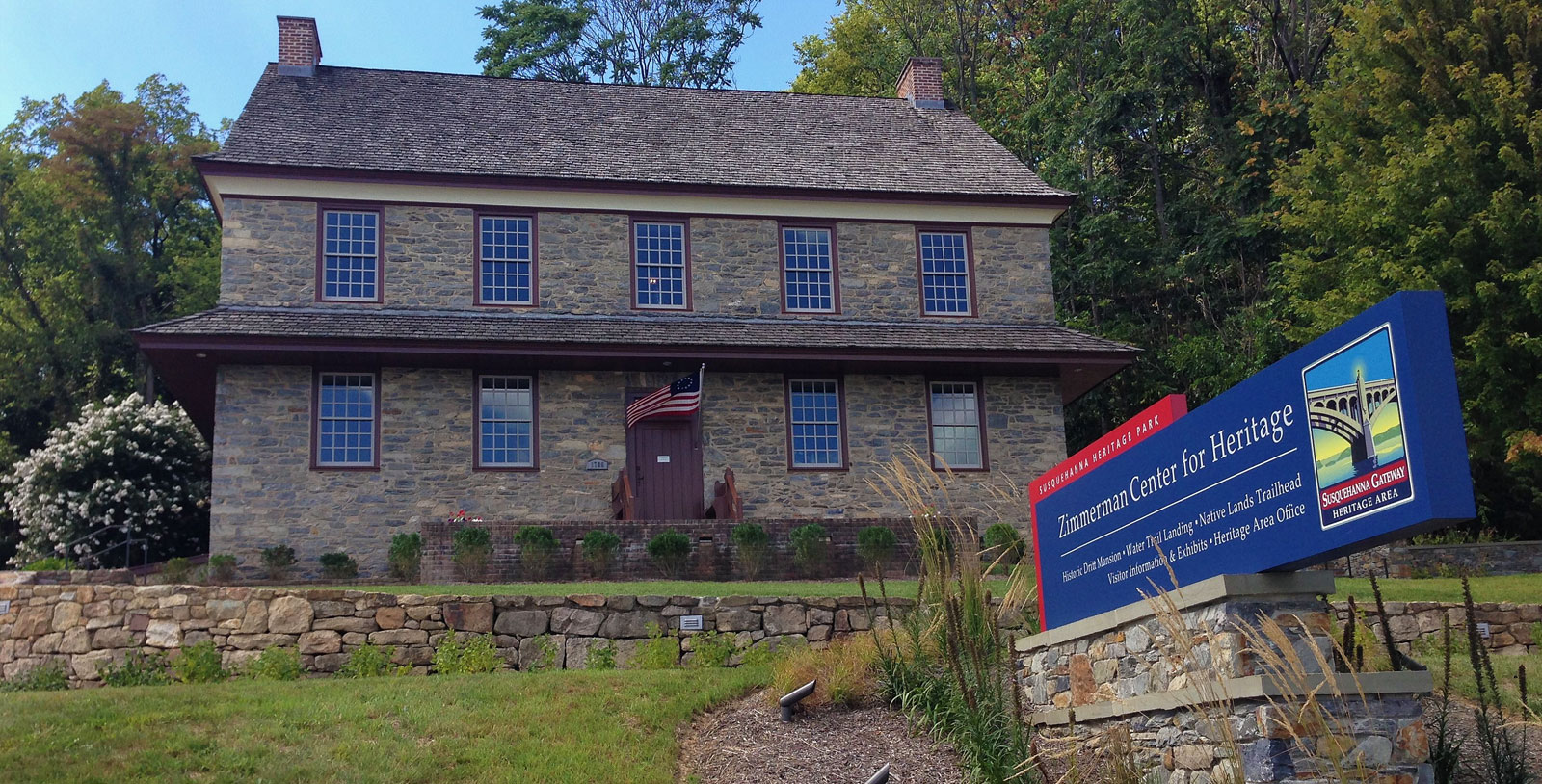 The Susquehanna Gateway Heritage Area (SGHA) is a designated Pennsylvania Heritage Area serving Lancaster and York Counties. SGHA’s special focus is the Susquehanna River, with a mission to enhance quality of life and economic vitality by promoting preservation, conservation, and interpretation of the river’s cultural and natural heritage. SGHA helps lead the Lower Susquehanna Conservation Landscape Initiative, manages the Susquehanna River Water Trail, and supports development of the Susquehanna Heritage Park, a network of recreation and historic sites along the river. SGHA manages these roles from The John & Kathryn Zimmerman Center for Heritage, a historic riverfront home just south of Wrightsville – a place for heritage and conservation education and land and river access for the water trail, heritage park and regional hiking trail system. 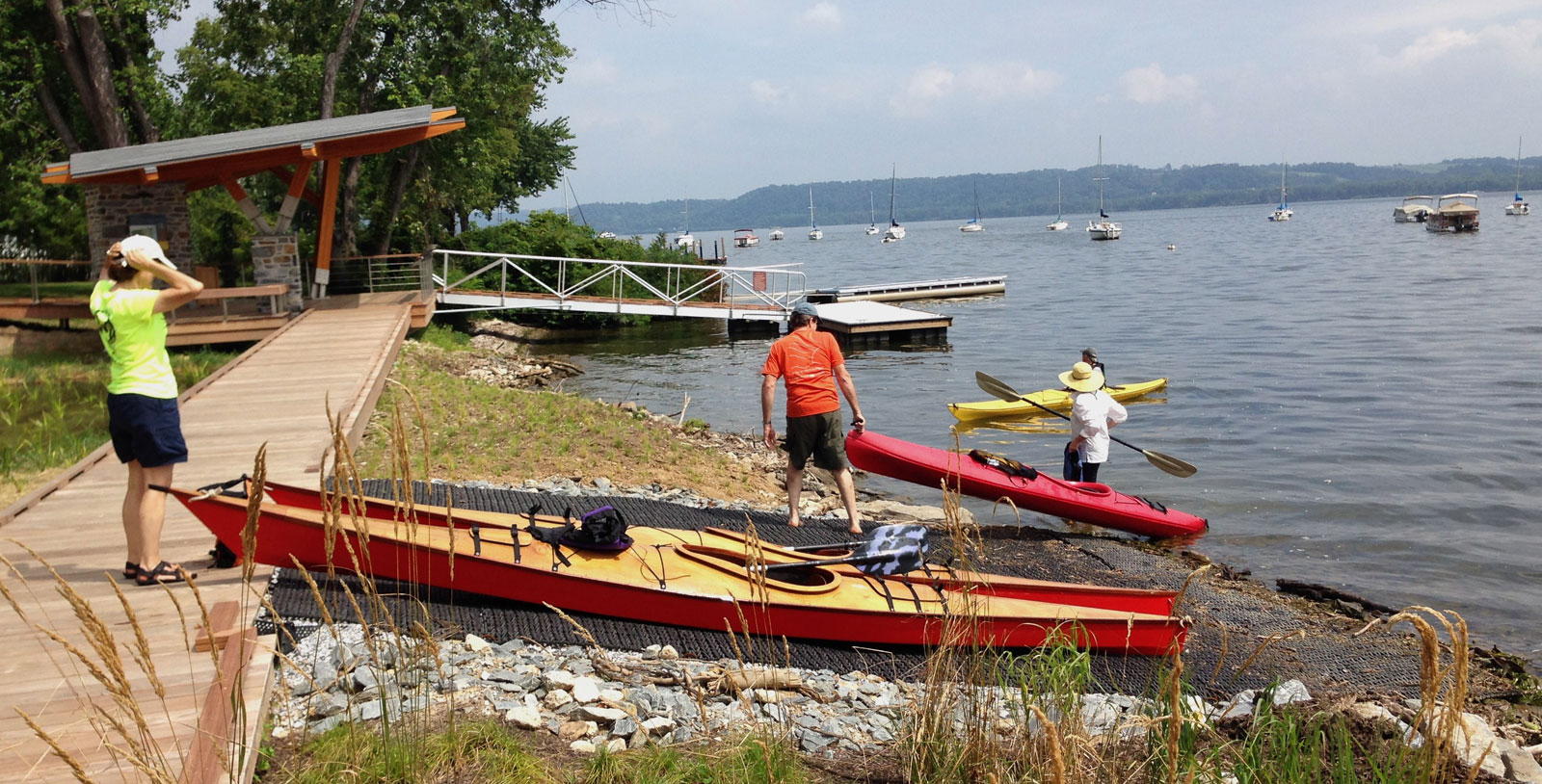 Design and permitting for the project was launched in early 2011. Lower Windsor Township approved the project’s Land Development Plan in January 2012, conditioned on permits and approvals required from state agencies. Preparation of construction documents and state permit reviews took place through late 2012 and early 2013, with project bidding complete in Summer 2013. Major construction of project improvements began in September 2013 and was completed in July 2014. The site opened to the public on August 1, 2014 and a ribbon-cutting celebration for project partners and funders was held on September 16, 2014.

The total cost of design, engineering, permitting and construction for the Zimmerman Center improvements is $1.58 million. SGHA secured project funding through a combination of local, state and federal grants and awards, as well as private giving. These include a $1.1 million Federal Highway Administration/PADOT Transportation Enhancement award for construction of visitor facilities, $127,000 from the National Park Service’s Chesapeake Bay Gateways Network for design, permitting and construction, $128,000 in PA Department of Conservation and Natural Resources grants for design and interpretive features, $75,000 from a PA Fish & Boat Commission grant for design of boating access facilities, and over $150,000 in private gifts and other SGHA funding.

As with many community enhancement efforts undertaken by Pennsylvania Heritage Areas, the Zimmerman Center project is a showcase for the innovative use of diverse funding sources to advance a major public improvement involving a variety of heritage and recreation components. The final product is a high quality visitor education and public access facility for learning about local, state and national history and enjoying the abundant land and water recreation opportunities along the Lower Susquehanna River corridor.

The Zimmerman Center was gifted to SGHA by John and Kathryn Zimmerman of Mount Wolf, PA in 2007. The property consists of 2.2 riverfront acres on Long Level Road south of Wrightsville, PA in York County. The site’s signature feature is the restored 1740-era stone home, commonly known as the Dritt mansion and listed in the National Register of Historic Places. The Zimmerman Center hosts heritage programs and events, showcases the Visions of the Susquehanna river art collection, and provides public access to nearby heritage and recreation facilities.

The Zimmerman Center site played a key role in Pennsylvania’s early frontier history. Marylander Thomas Cresap arrived here in 1730 with a land grant from Lord Baltimore, including this property, which he named “Pleasant Garden.” Cresap established a fort and ferry, collected taxes for Maryland and remained loyal to Lord Baltimore. Pennsylvanians came to despise Cresap for his aggressive behavior and ruthless dealings with local settlers. He was eventually arrested in 1736 and driven out of the area after a series of bloody skirmishes known as “Cresap’s War.”

Historians date the home to about 1740, after Cresap departed. The house is historically associated with Jacob Dritt, who lived here from 1783 until drowning in the river in 1817. The property remained in the Dritt family until 1851. Dritt served in the Revolutionary War and was a Major General of the Commonwealth Militia. His stone house was a residence and a place of business, for Dritt was an entrepreneur engaged in wine and liquor trading, farming, milling and operating a ferry. He also laid out the village of Washington Boro across the river. The family cemetery, on a hilltop behind the house, is now part of York County’s Native Lands County Park.