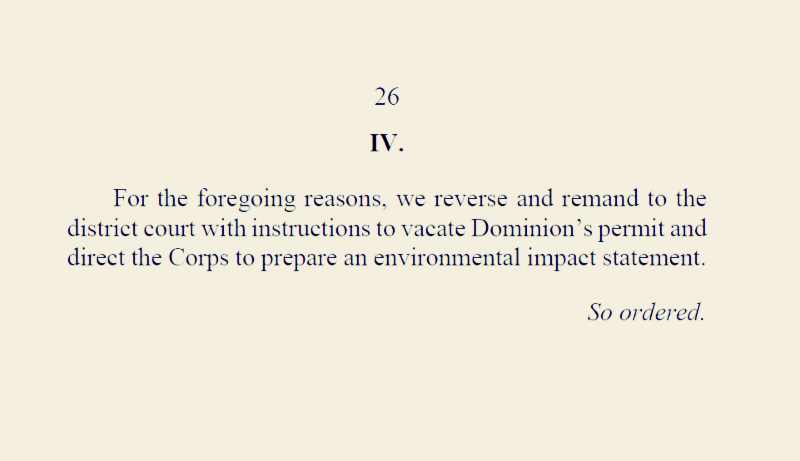 For years, a broad coalition of citizens and conservationists as well as agencies and experts told the U.S Army Corps of Engineers an environmental impact statement must be prepared for Dominion Power’s proposed transmission line across the James River, just downstream from Jamestown. The Corps disagreed and in 2017 permitted the “Surry-Skiffes Creek” line along with its 17 new towers in the river.

On Friday, March 1, the U.S. District Court of Appeals for the District of Columbia vacated the permit and ordered the Corps to conduct the environmental impact statement. The decision is an enormous vindication for all who opposed the transmission line and contested the Corps’ decision-making process. The court’s 26 page order is a compelling and fascinating read for all who care about conserving important resources. Among other striking phrases, Judge David Tatel writes: “These are hardly the hyperbolic cries of ‘highly-agitated’ not-in-my-backyard neighbors … Instead, they represent the considered responses—many solicited by the Corps itself—of highly specialized governmental agencies and organizations.”

The National Parks Conservation Association, the National Trust for Historic Preservation and Preservation Virginia filed lawsuits in 2017 that led to the Court of Appeals’ decision last week. They and many other organizations concerned about the James River project are members of the Chesapeake Conservation Partnership. While the Partnership was not formally involved in the case, the powerline was one of several linear infrastructure projects threatening Chesapeake conservation values that led to the Partnership’s 2018 report on options for improving landscape-scale mitigation of energy projects.

The fate of the Dominion’s transmission line, completed recently, is unclear at this point. Conservationists indicate they will push for its removal. Regardless, the courts’ decision creates an important precedent for the future. For more, read this story from E& E News.