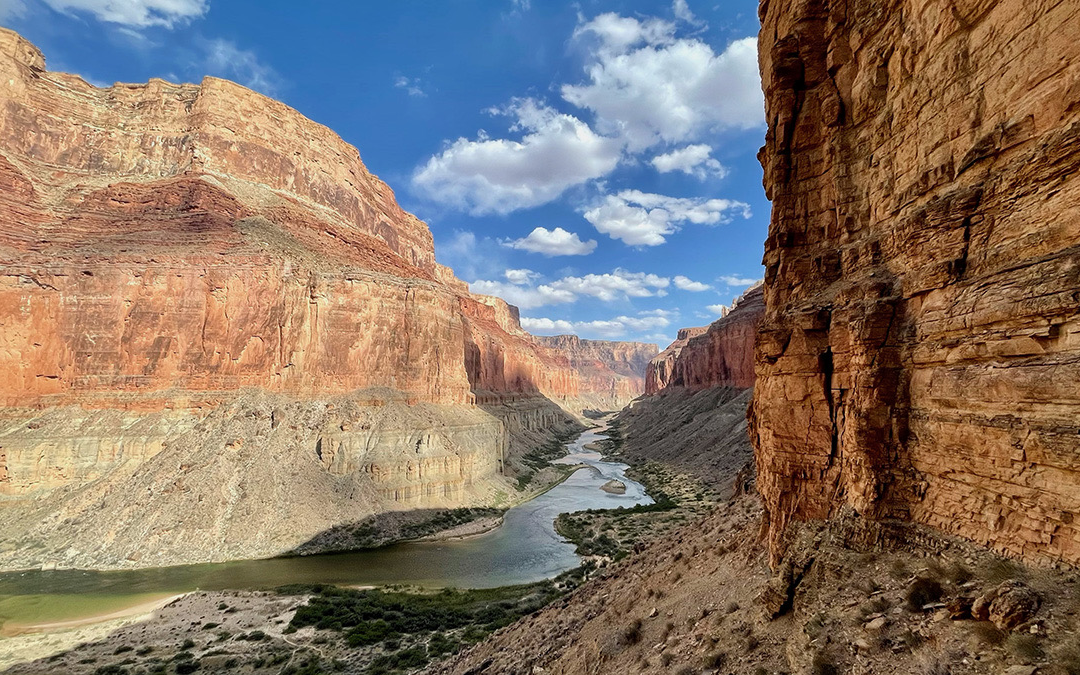 Why a photo of the Colorado River in the Grand Canyon? A recent experience there leads to this reflection on the value of wilderness.

Wilderness. I’ve strayed from it in recent decades – the experience and the concept.

Not long ago, I wrote “the rose-colored glasses are off” when it comes to wilderness. My last five years of regular international travel illustrated how humans have touched almost everywhere, even the most remote locations, strewing our impacts liberally and usually without caution. In our pockets many of us carry devices allowing us to view virtually any landscape on the planet from above, in detail. And the past year plus of pandemic and continuing struggle for racial equity have made it abundantly clear, though it should have been clear before: people need more parks close to home and some people – Black and Brown people – have been, and are still too often, systematically discriminated against when it comes to access to parks and the outdoors.

It all led me to think and write more about the urgency of certain kinds of conservation. Equitable access. More parks. Mitigating climate change. Protecting habitat. Saving farmland. I almost forgot about wilderness and questioned its meaning and relevance in today’s world.

I had been too long away. Thirty-four years since a last lengthy sojourn in wilderness — until last month’s 17 day journey with 16 friends along 279 miles of the Colorado River through the Grand Canyon. 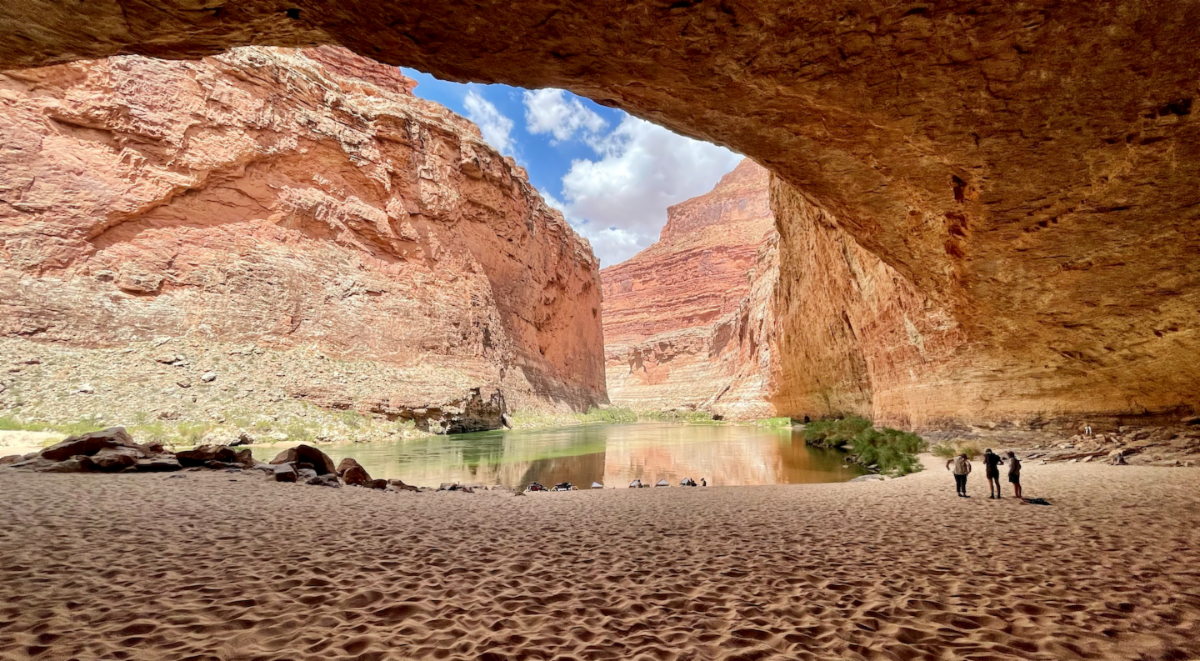 Redwall Cavern carved in the Redwall limestone by the Colorado. 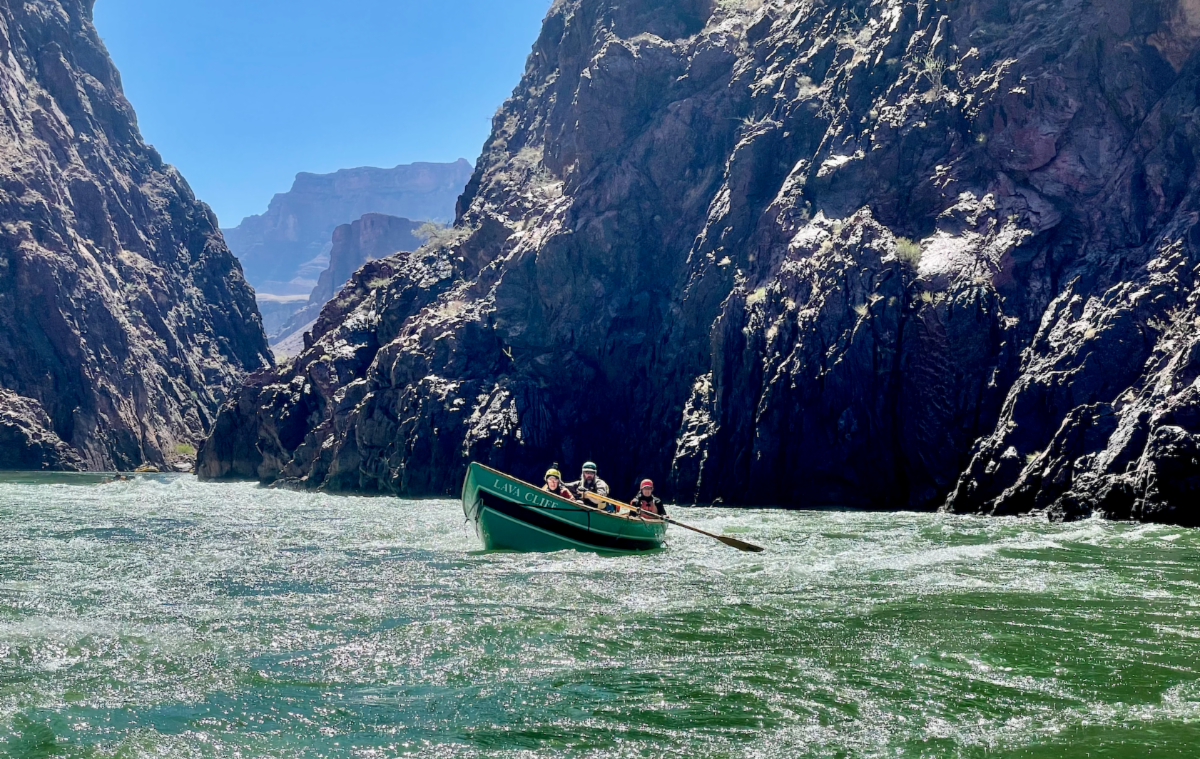 The classic wooden dories of the Grand Canyon.

There is something about enough time away from it all. With every passing day extraneous bits fall away.

Slowing down to move at the pace of a river in small wooden boats, even a river with major rapids, changes the pace of life.

Night after night of sleeping outside—under the bats swooping for insects, under skies so clear and dark the billions of stars above cast a combined shadow—makes one want it all the time.

The majesty and timelessness—no, the evidence of deep time—in the canyon walls transforms one’s understanding of meaning and importance.

One afternoon, we walk from our river campsite up a dry tributary into Blacktail Canyon. We come to a spot where the Tapeats sandstone lies directly atop the Vishnu schist and Zoroaster granite, the metamorphic rock that forms the deepest, most narrow portions of the Grand Canyon. The horizontal line between the Vishnu and the Tapeats is known as the Great Unconformity. It represents a 1,200 million year gap in time—1.2 billion years, one fifth the planet’s entire history—between when the schist and granite, the basement rock of the continental plate, was at the surface of the earth and the point much, much later when a vast, shallow ocean began to lay down the sands that became the Tapeats. 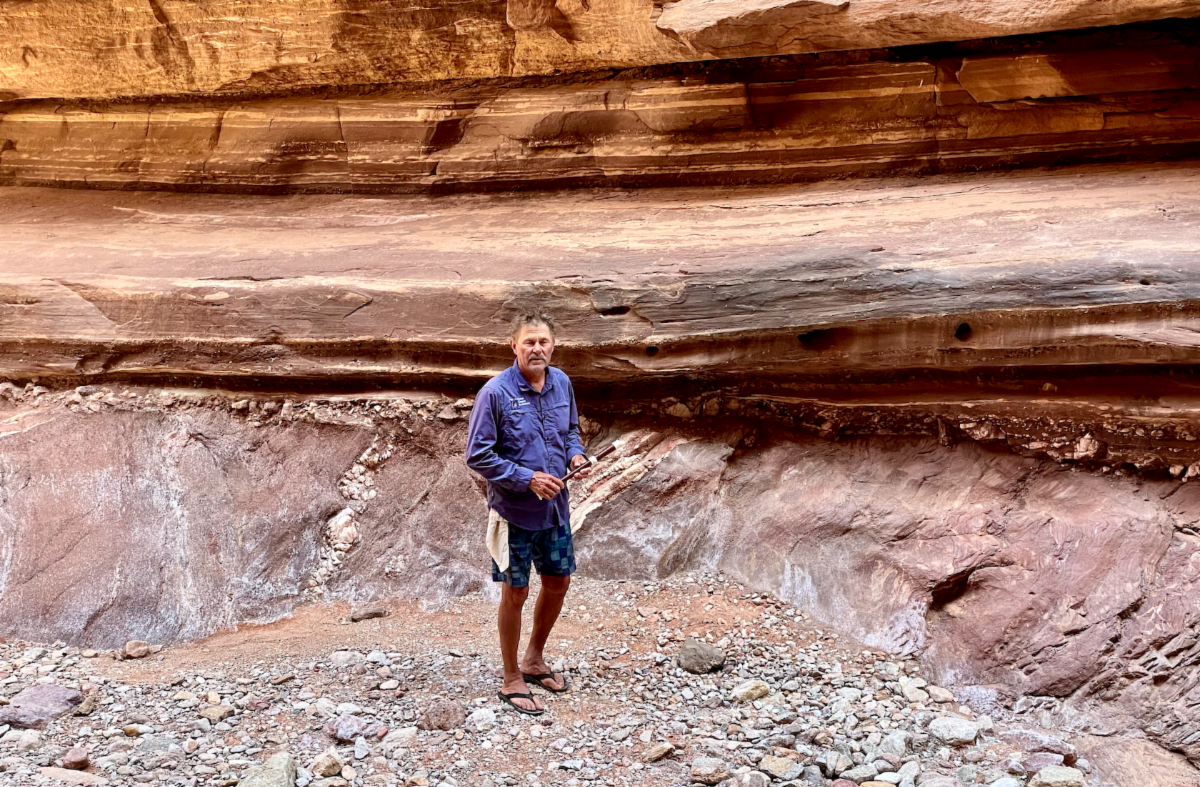 André Potochnik, river guide and geologist describing the Great Unconformity, a 1.2 billion year gap in geologic history; the metamorphic Vishnu schist below and the sedimentary Tapeats sandstone above.

We make our way up Blacktail along the Great Unconformity, a full mile deep below the Kaibab Plateau at the rim of the Grand Canyon. We are quiet, awestruck by the light on the carved Tapeats cliffs above. The space and magnificence created over millennia evokes medieval cathedrals built over centuries in Europe, but far surpasses them.

Spread out, one by one, we come to a small pool and sit on rocks and sand.

For an hour we sit, tears falling down the faces of many from beginning to end. An unplanned and unanticipated Quaker meeting for worship. The rare kind many describe as “gathered” or “covered,” where all present feel deeply united in a shared experience of spirit. We stand to end and shake hands, in the way Quakers do. But for most of us, it is the first shaken hand in 15 months and profoundly touching. 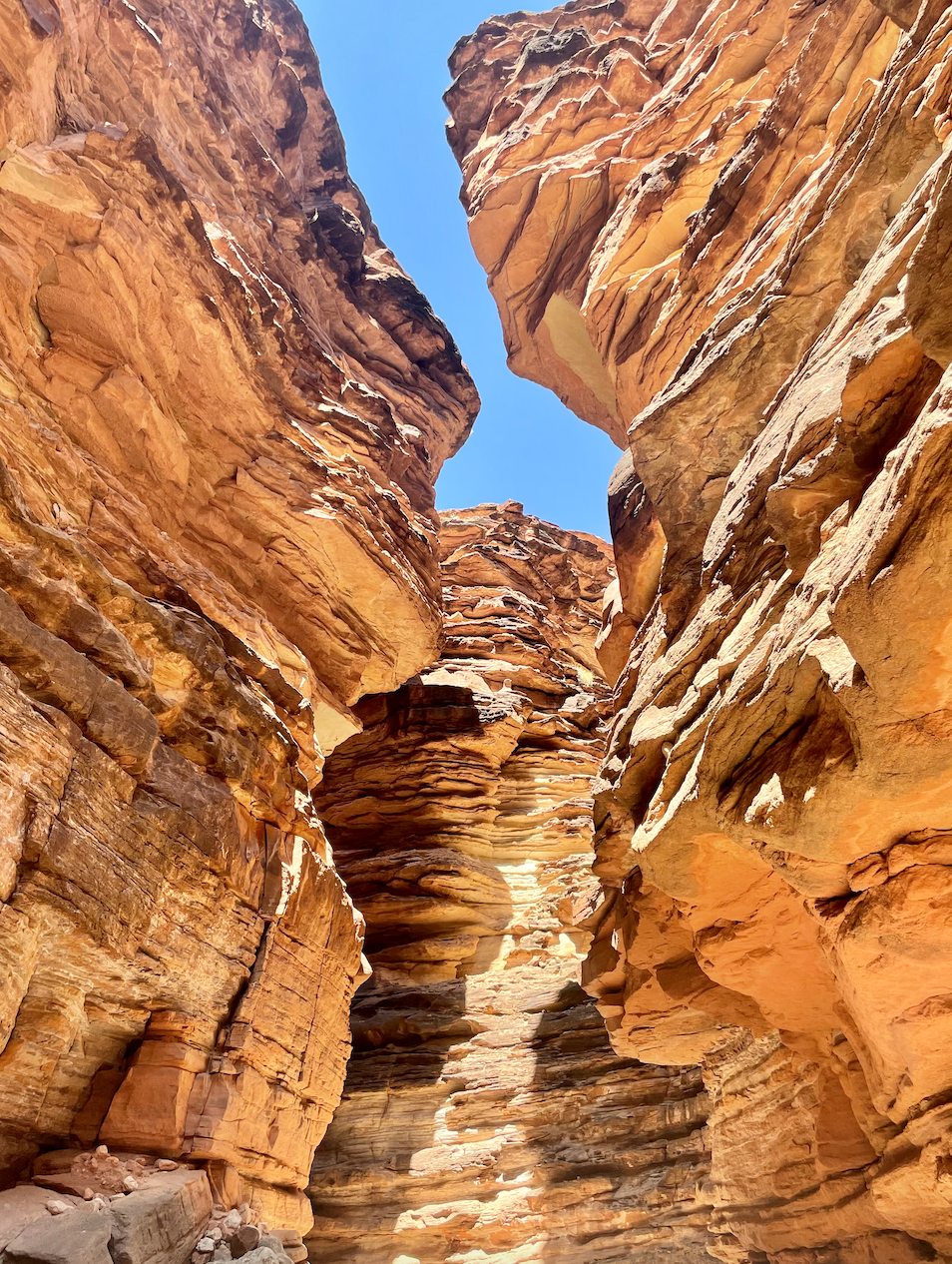 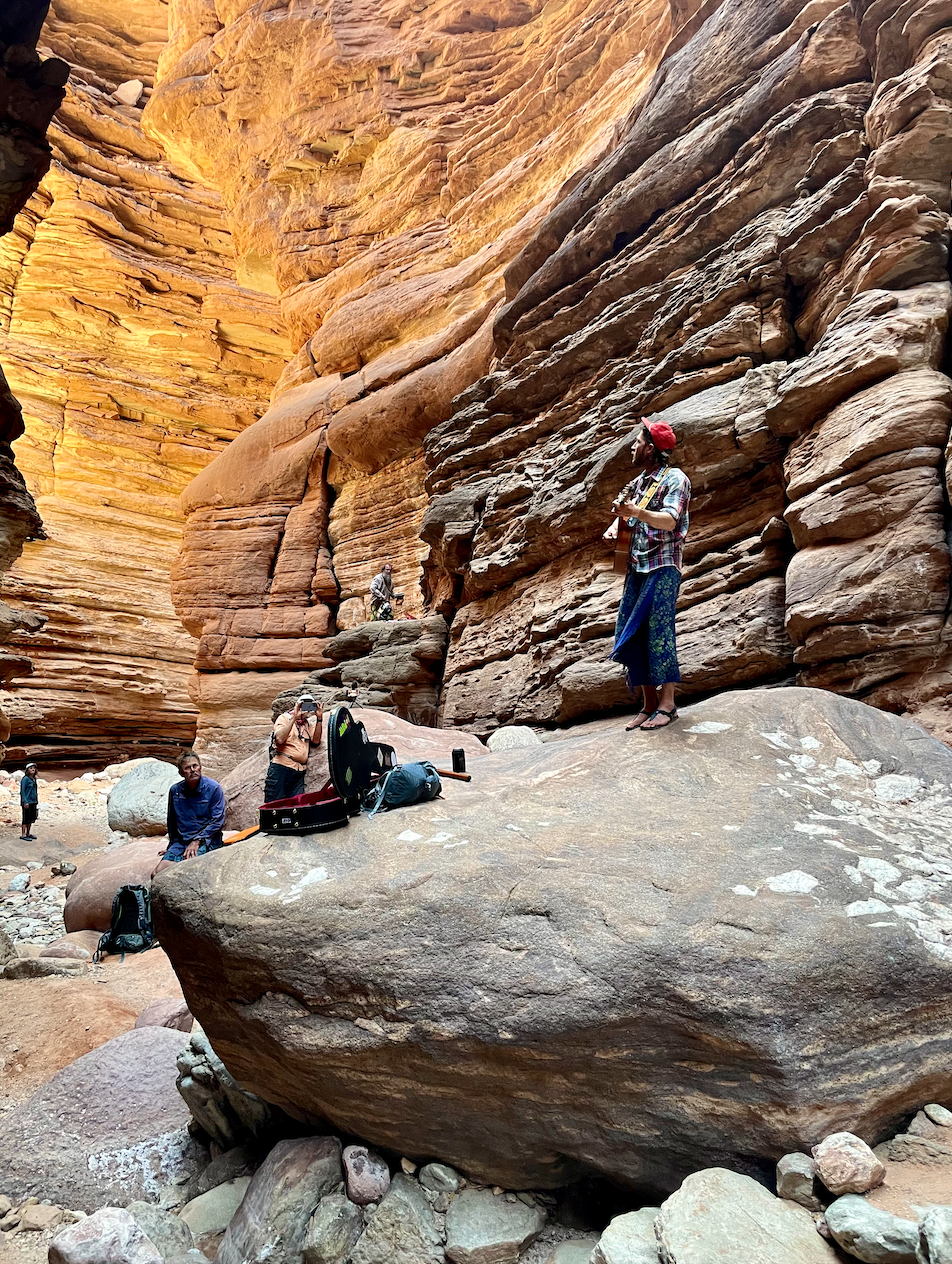 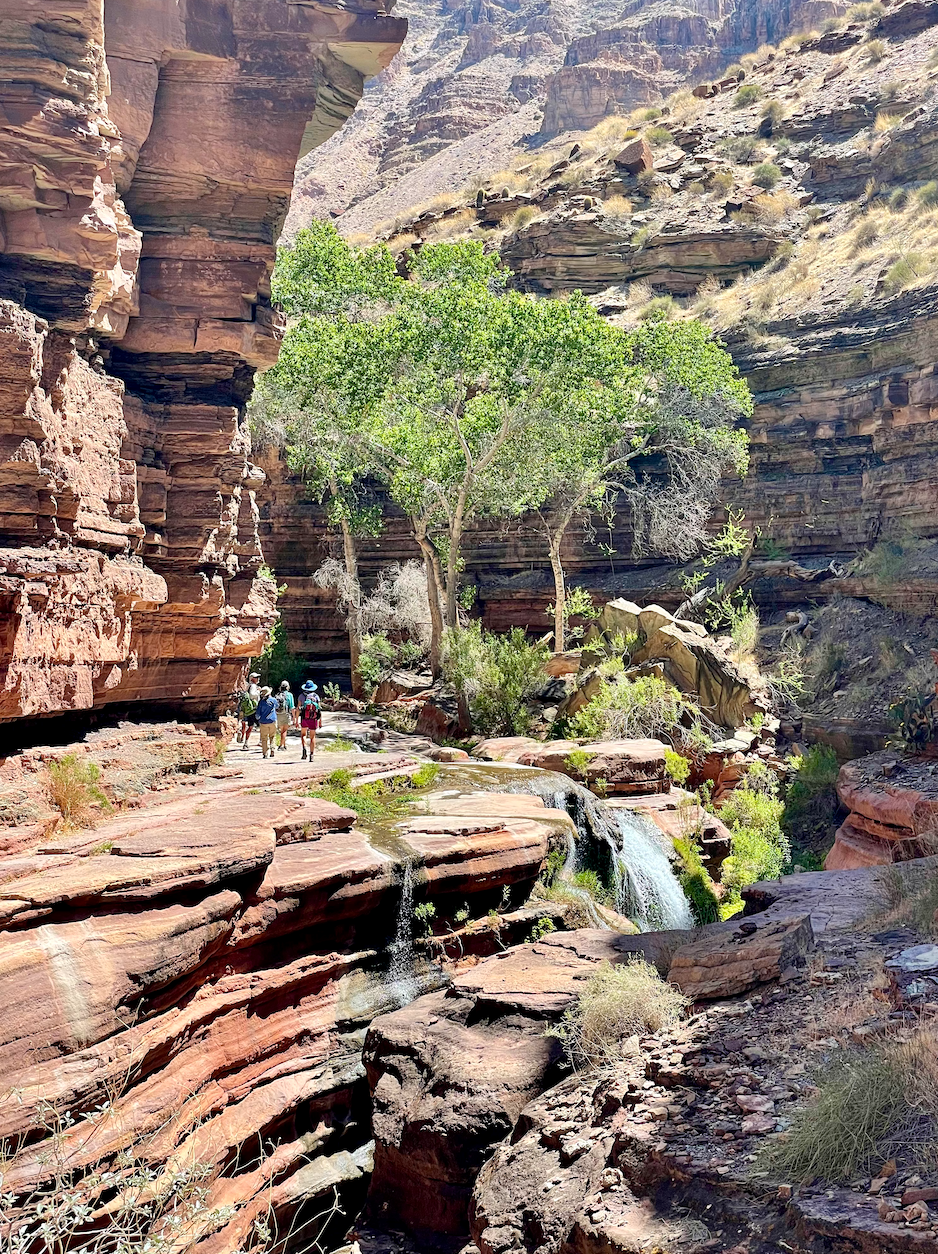 I cannot recall ever having been as moved for such a sustained period in the outdoors. Why did it happen then?

Gratefulness for being in community of friends after 15 months of pandemic separation? Our own individual personal situations? Nine days – by then – of being disconnected from our phones, texts, email and the wider world? A setting of immense beauty, created by the power of nature and the depth of time? An openness to it, fueled by our shared experience of Earlham College and its Wilderness Program?

For me, that afternoon – and the entirety of the 17 days – were a reminder, a clarion call, of the values and human need for wilderness.

Yes, our little group of 16 is among the most privileged—the 0.00008 percent of Americans who will travel the Colorado through the Grand Canyon in any single year. And the even tinier number who will make the trip in traditional wooden dories. We are beyond fortunate to have good health, full vaccinations, superb education, deep experience and comfort in the outdoors and the time and resources to travel.

But in this crowded, busy, inequitable world everyone needs and deserves the opportunity to reconnect with our common ancestral nature—the places in which our own species evolved and formed culture.

Shamefully, these landscapes remain under threat. You would think we would learn. Just over fifty years ago, the Grand Canyon itself was on the verge of being flooded by two proposed dams. People rose up to stop it.

But just four years ago, and not far away, Bear Ears National Monument was reduced to 15% of its original size to facilitate oil, gas and mineral extraction. The Boundary Waters Canoe Area Wilderness in Minnesota is endangered by a proposed sulfide-ore copper mine. Recently issued leases to drill for oil in the Arctic National Wildlife Refuge have been suspended, but only temporarily, so far. And it continues.

In The Emerald Mile, Kevin Fedarko writes: “the canyon stands as one of our most important touchstones—a kind of roofless tabernacle whose significance is both natural and national. It is our cathedral in the desert and the word our is key because although the canyon belongs to the entire world, we, as Americans, belong particularly to it.” 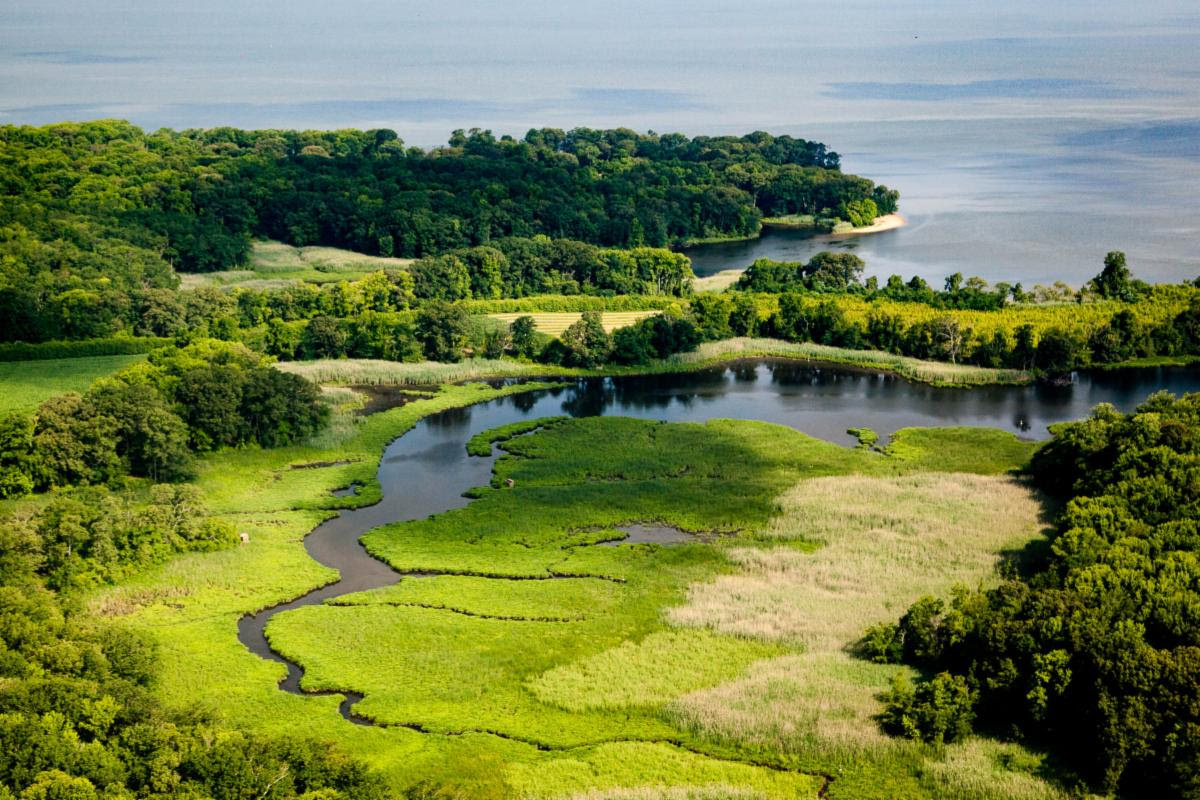 It is not a stretch to assert the Chesapeake represents something similar in our psyche. It has expansiveness, ecological richness, deep history, multiple cultural touchstones, water that soothes and challenges, and even a name that rings with authenticity.

Some might ask, but with 18 million of us here, where is the Chesapeake wilderness anymore? There is still wild out there—the Pennsylvania Wilds, 2.1 million acres of public land, 25% of the state’s land with only 4% of its population. On a stormy day, boating on the Chesapeake can be just as challenging and dangerous as running a dory through Grand Canyon’s Lava Falls. And on spring days migratory birds pause to feed and rest in city parks in Richmond, Washington and Baltimore during their flights from South and Central America to the boreal forests of the north.

We need wilderness in this world. We may not get to the vast open stretches of it every day, or every year, but when we do, it restores us.

We need that restoration in our daily lives as well. Tony Hiss, in his new book Rescuing the Planet, quotes a leader of the Dene, a First Nations people of Canada as saying: “There is no word in our language for wilderness, for everywhere we go it is our home.”

For our health, we must restore that same kind of connection in our surroundings. We each need to experience green space, parks and trails in our neighborhoods and nearby, every day. There need to be enough of them to be restorative for every one of us. That means we need many more acres and miles of them, for being turned away due to over-crowding is not restorative.

There’s another equally compelling rationale for wilderness, green space and re-wilding—sustaining the biosphere, that tissue thin layer of life surrounding the globe and including us. But, that’s a story for another day.

“If we are to have a culture as resilient and competent in the face of necessity as it needs to be, then it must somehow involve within itself a ceremonious generosity toward the wilderness of natural force and instinct.”