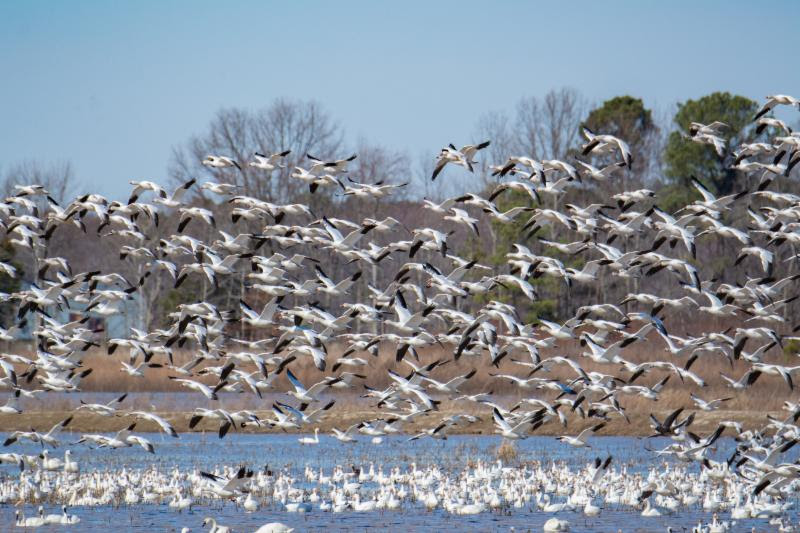 We have shared some global news in recent weeks that, when taken together, can become a bit disheartening — the climate crisis, warnings of the threat of mass extinctions, the calls for immediate action.
Conservationists — and all people — must keep hope. And so we will take a few of our Lightning Updates to share some signs of hope, observed recently by some of us.

Many here in the Chesapeake region witness the annual winter influx of Snow Geese, a true spectacle of nature. These beautiful birds spend their winters around the Delmarva area at places we conserve, like Blackwater National Wildlife Refuge.

It’s easy to forget, though, how interconnected our conservation efforts are with those of others around the world. Bird migration illustrates that as much or more than anything else.

So, where do those Snow Geese go for the other eight months of the year? All those wintering here head to their breeding grounds in the northern Canadian tundra. Last week, we had a chance to see some of them (thousands actually!) still making their way north while stopping by another wildlife refuge in Canada, along the St. Lawrence River.

Cap Tourmente National Wildlife Area, like Blackwater NWR here, is a Wetland of International Importance under the Ramsar Convention. Snow geese stop at Cap Tourmente to refuel for the rest of the trip north. On May 25th there were over 6,000 geese there, but just three days later, a mere 250 flying overhead; the rest had moved on.

Snow geese are not considered threatened, and, in fact, their numbers have increased substantially in recent decades. But, they are an iconic Chesapeake species and their migratory pathway is a visible example of the need for linked conservation here and elsewhere. There are over 2,300 Ramsar Sites like Blackwater and Cap Tourmente around the world, conserving over 518 million acres. But we need to conserve more to ensure the survival of a myriad of other species.

For a bit of inspiration, and a glimpse of Cap Tourmente and Snow Geese (many of whom probably spent their winters in the Chesapeake), take two minutes to watch this video. Plus, it’s a pretty compelling example of good messaging that connects people with a special place.