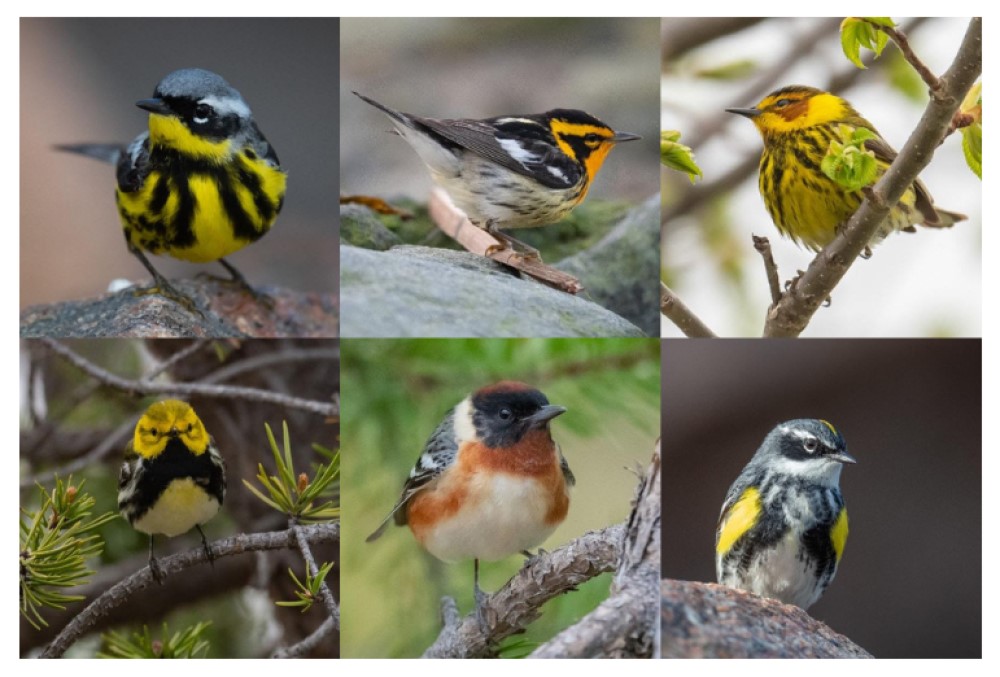 In part two of our “signs of hope” Lightning Updates, we share more news from this spring.

Over the past few months, an estimated two to three billion (yes, billion) birds migrated into and through the United States following long-traveled routes. The Chesapeake Bay watershed sits along the “Atlantic flyway” and supports large numbers of these birds during migration.

Few migratory species in north America are more spectacular than the many types of warblers — tiny birds decked out in the flashiest of breeding plumage in spring. How tiny? Most species are only 4-5 inches long and weigh 0.3 ounces — the weight of two nickels. Yet, they fly thousands of miles each year.

In late May, some of us had a chance to see the beautiful warblers pictured above in eastern Quebec as they continued their journey north to breeding grounds in Canada. Each of these birds likely passed through the Chesapeake watershed, stopping to refuel on insects and caterpillars during their long trek. Some of the species seen in Canada also breed in portions of the Bay watershed, like the Magnolia Warbler which can be found in the Appalachians, central Pennsylvania and New York through the summer.

The phenomenon of wildlife migration is a reminder of the fundamental need for landscape-scale conservation. Birds and other species don’t stay put. They move across broad ranges and depend on a variety of habitats to support their lives.

Take a look at this fascinating “abundance animation” of where Magnolia Warblers are found during the course of a year. One look illustrates how critical land conservation in the Bay watershed, central America, and Canada is to the survival of this species.

The birds pictured above were among 48,100 warblers observed in a single day, passing one observatory along the St. Lawrence River! It’s heartening to think of this abundance, and that it means these birds are all around us in spring on their way north — resting and feeding in our city, county, state and national parks, our refuges, and the protected and unprotected forest lands throughout the watershed. Their beauty reconnects us with the natural world upon which they and we depend.