The Rappahannock Tribe’s Return to the River: Conserving Fones Cliffs 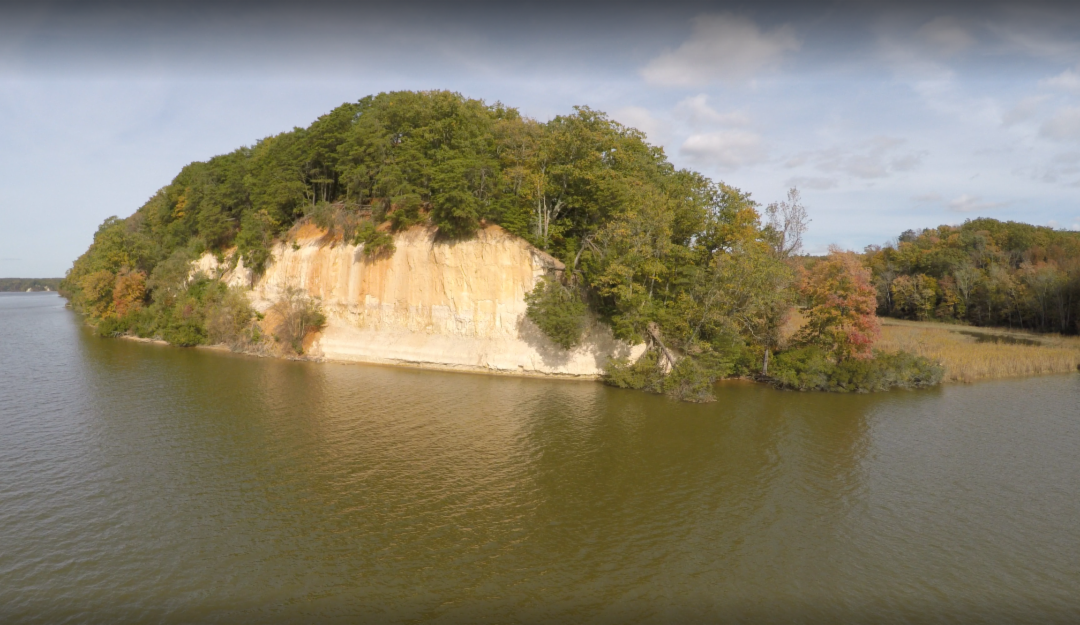 On April 1, 2022, joined by Department of the Interior Secretary Deb Haaland, the Rappahannock Tribe of Virginia celebrated a milestone in their centuries-long quest to return to their homeland along the river that bears their name. With a generous donation from the family of William Dodge Angle, M.D., Chesapeake Conservancy purchased and donated 465 acres of waterfront property in what is now Richmond County, Virginia, to the Tribe, who restored its original name of Pissacoack. Additional funding was made possible by a grant from the National Fish and Wildlife Foundation through Walmart’s Acres for America Program.

The property is located in the heart of an iconic formation of diatomaceous bluffs known locally as Fones Cliffs, famous for its outsized importance to bald eagles and other migratory birds and infamous for the battles to conserve it. 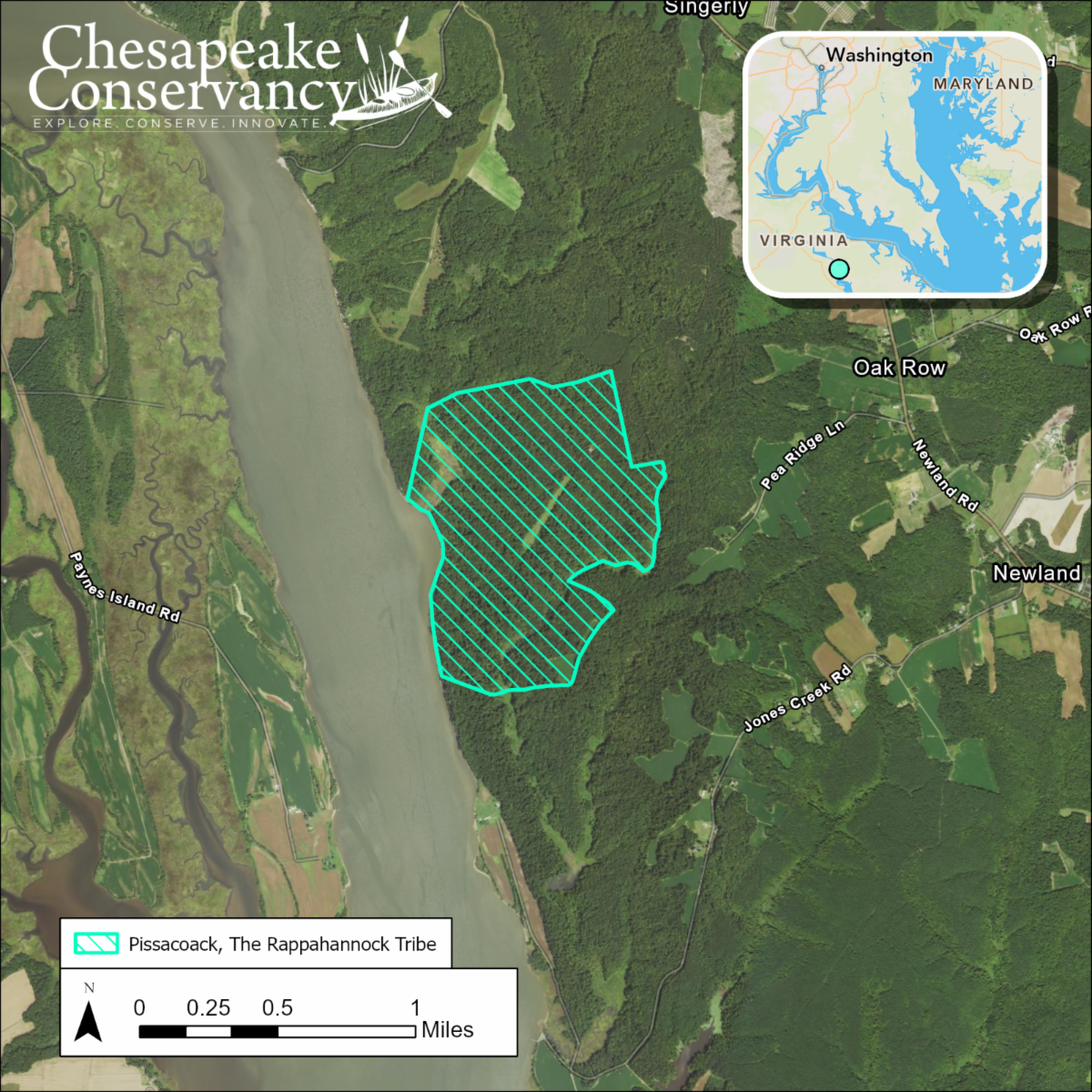 The earliest written record of the Rappahannock Tribe and their occupation on the cliffs comes from the journals of English explorer John Smith, in which he describes the Tribe’s first recorded defense of their homeland in 1608. As Smith and his crew sailed up the river, Rappahannock bowmen disguised in the marsh vegetation near the cliffs fired a volley of arrows toward Smith’s shallop, portending the fights that would surface hundreds of years later. Over the remainder of the 17th century, the Tribe was driven further and further from the cliffs and from the river itself. The indignities and oppression foisted on Indigenous people by colonial and state governments in Virginia are well documented. Only in recent times has that realization taken root in government policies, which are finally changing to recognize tribal sovereignty and make amends for past practices.

Ironically, it was Smith’s explorations and descriptions of the Chesapeake Bay and its inhabitants that first made Chesapeake Conservancy aware of Fones Cliffs. An early component of Chesapeake Conservancy’s mission was and continues to be to support the National Park Service’s (NPS) Captain John Smith Chesapeake National Historic Trail. The nation’s first water-based national historic trail, the Chesapeake Trail (for short), traverses Smith’s routes up the Chesapeake’s tributaries, encouraging visitors to explore the magic of the Chesapeake and to learn about its many cultures. The resilience and tenacity of the Bay’s Indigenous communities remains a focus of the NPS’s continuing research, as partners collectively seek to incorporate traditional knowledge to address current and future ecological challenges. As noted by Chesapeake Conservancy’s President and Executive Director Joel Dunn in his remarks on April 1, “The story of separation and loss is giving way to a new story of resilience, restoration and reconnection.” 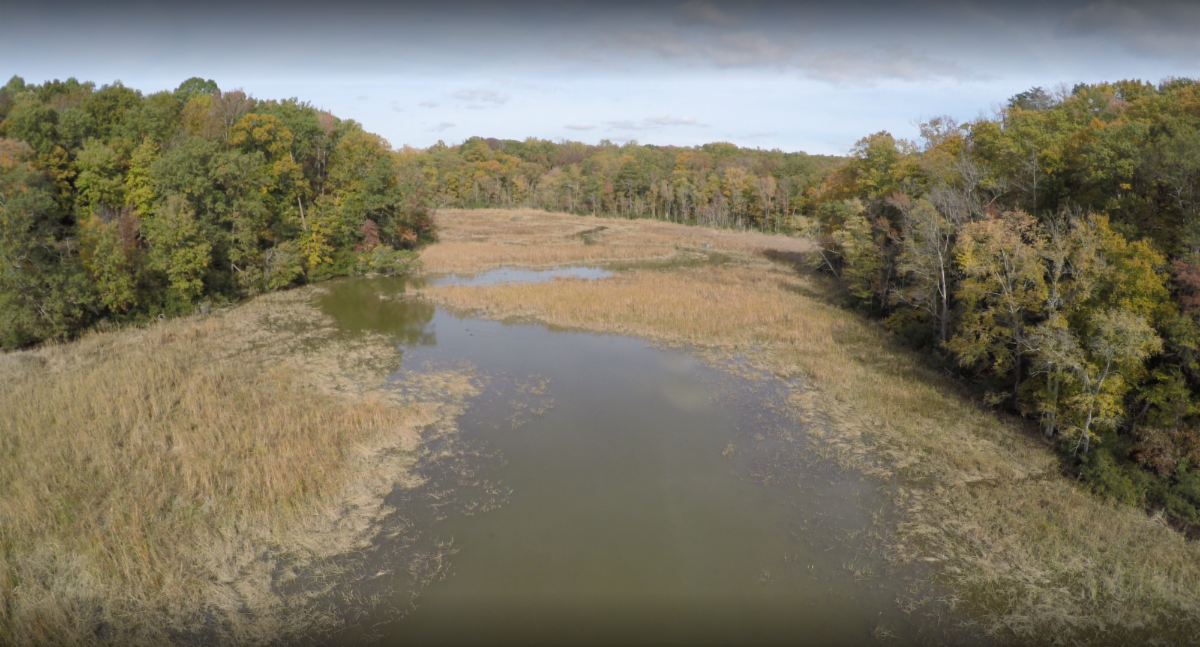 The fight to save Fones Cliffs took on new meaning for the Tribe, Chesapeake Conservancy and many other conservation partners beginning in the mid-2000s and it continues today. The first alarms began to sound in 2007 when the owner of a 250-acre riverfront parcel received county approval for a 46-unit subdivision. As proposed, there would have been 22 riverfront lots looming over the cliffs and a 46-slip pier in the river below. Lengthy negotiations to secure the conservation of this property stretched into years, while a bigger and potentially far more devastating subdivision proposal surfaced.
In 2015, the Virginia True Corporation, headquartered in New York, received preliminary approval for a massive resort subdivision, complete with an 18-hole golf course, hundreds of condos and single-family homes, lodge, restaurant, stables and more. The wildlife habitat values to bald eagles and dozens of breeding species of migratory birds on this 968-acre property would have been devastated. Even more troublesome was the prospect that the unrecorded and un-researched history of the Rappahannock people’s use of this site would be lost forever.

While the county had hoped the development would bring much-needed jobs and tax revenue, it became apparent that the developers lacked the capacity to deliver on their outlandish promises. This realization was made painfully obvious in 2018 when the developers illegally cleared 13 acres to bare ground, in violation of state and county laws. The resulting erosion caused trees at the top of the cliffs to fall and the cliff face to slough off into the Rappahannock River. The outcry from those who love and value the river and bay was heard clearly from Virginia to New York. In 2019, the company declared bankruptcy, and the case remains unresolved. While the resort proposal appears thankfully dead, the property remains unprotected and therefore at risk. Chesapeake Conservancy, The Conservation Fund (TCF) and other conservation partners are vigilantly tracking the bankruptcy proceedings such that a conservation outcome can be brought to bear. 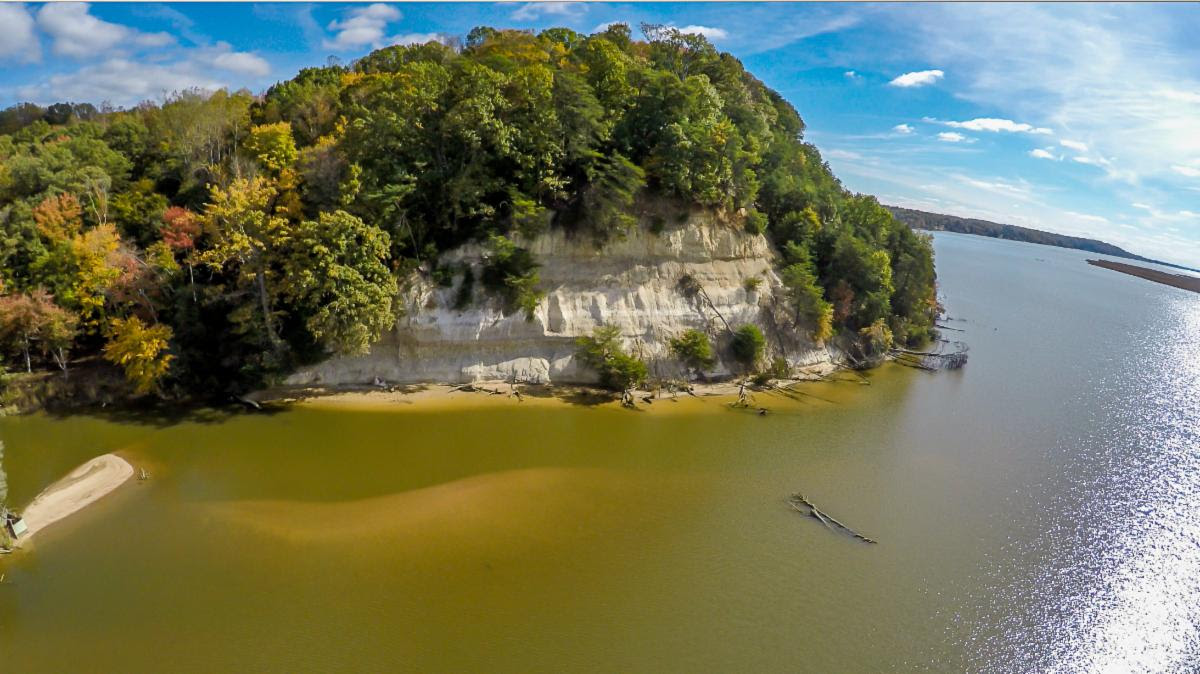 Despite the struggles to save the cliffs, the Rappahannock Tribe has found reasons to celebrate. In 2017, thanks to the generosity of Ms. Virginia Warner, Chesapeake Conservancy facilitated the donation of one acre of land near the cliffs to serve as a staging area for the Tribe’s Return to the River program. This initiative trains tribal youth in traditional river knowledge and practices and conducts outreach and education for other communities interested in the Rappahannock River. At the beginning of 2018, the Tribe finally achieved the long-sought goal of being formally recognized by the federal government, establishing tribal sovereignty and a government-to-government relationship. These victories paved the way for the tribal conservation success that would soon follow.

In 2018, after years of wrangling, the threatened 250-acre riverfront property was purchased by TCF and soon after was sold to the U.S. Fish and Wildlife Service (USFWS) for inclusion into the Rappahannock River Valley National Wildlife Refuge. Today, the Tribe and the Refuge refer to this site as its original name of Wecuppom. The entire Fones Cliffs formation has long been identified by USFWS as a high priority for conservation. In 2019, the Tribe received an offer from the owners of over 1,100 acres at Fones Cliffs to sell the property to the Tribe. For so many years, issues surrounding land use, and land protection, at the cliffs had been fraught with divisiveness. Now, at last, there was a path to conservation that was paved in cooperation and goodwill. However, the reality soon set in that waterfront property of this size, and in this beautiful and iconic location, is expensive.

Chesapeake Conservancy immediately began seeking funding to assist the Tribe in purchasing the property and joined forces with TCF toward that ultimate goal. It should have come as no surprise that despite the incredible attributes of Fones Cliffs, and the compelling interests of the Rappahannock Tribe, fundraising was difficult. Funding for land conservation is highly competitive, with much demand and not enough supply. It seemed that a miracle would be needed to meet the deadline set by the landowners. And then, on the wings of an eagle, or perhaps a tundra swan, one was delivered to the Tribe.

In August 2021, Chesapeake Conservancy was approached by The Wilderness Society and members of the family of William Dodge Angle, M.D., who were seeking to conserve land on the Rappahannock River, with the caveat that the first project be “ready to go.” This was an acknowledgment that land deals can sometimes take years to pull all the loose ends together, and the family was interested in making an immediate impact. When the Angle family toured Fones Cliffs, saw dozens of eagles, met Chief Anne Richardson and heard her share her vision of using the cliffs as a place to teach the world about the history and ways of her ancestors, they immediately embraced the significance of the opportunity at hand. We will be forever grateful for their generosity, and the family legacy is now permanently enshrined on Fones Cliffs.

It has been said that success begets success. As the Chesapeake Conservancy worked to complete due diligence requirements, the Tribe was working with other potential funders. In 2021, the Tribe was awarded a grant from the National Fish and Wildlife Foundation through Walmart’s Acres for America Program. These grant funds were combined with Angle family funds to complete the purchase of 465 acres in February 2022, where the name Pissacoack has now been restored to the property. As part of the transaction, a permanent conservation easement was granted to the USFWS. At the April 1 ceremony, Chief Anne praised the tenacity and resilience of tribal ancestors as she declared, “the circle is now complete.” 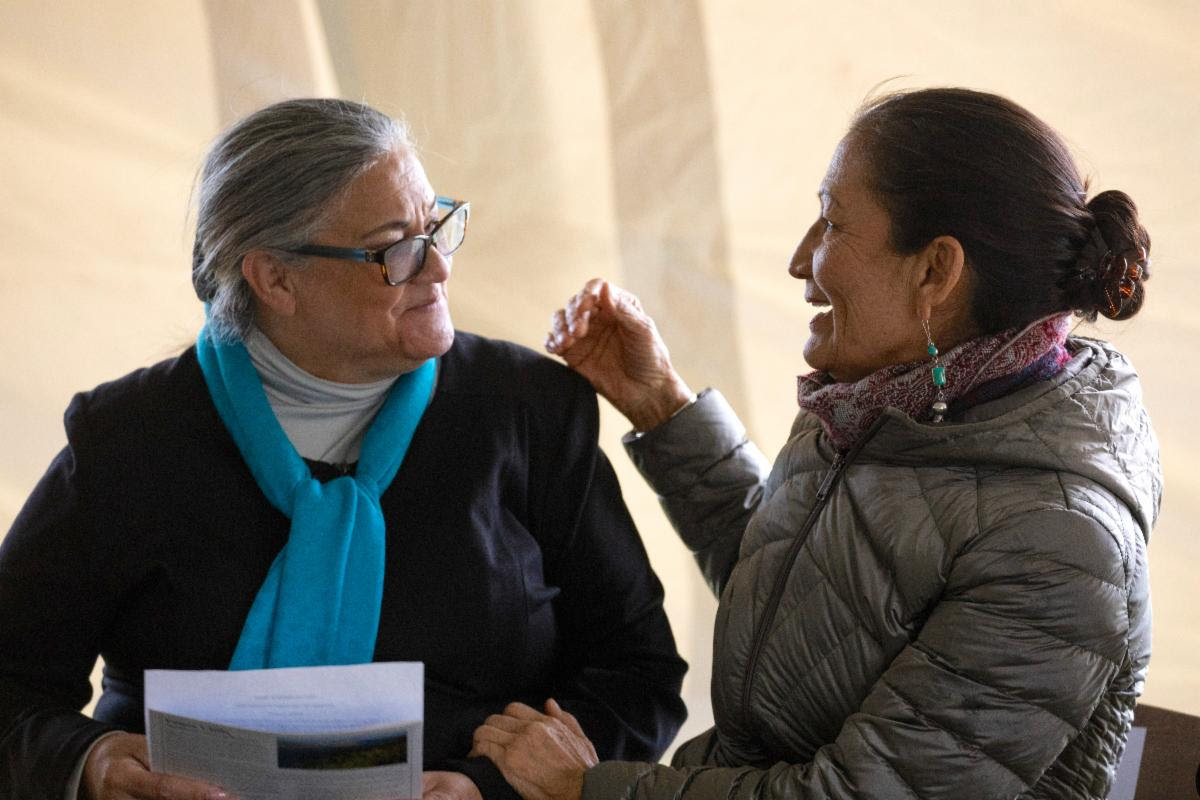 The story of the Rappahannock Tribe and their association with these cliffs began thousands of years ago. There is so much at stake with this site for the tribe, for the National Wildlife Refuge, for eagles and other wildlife, water quality and the Chesapeake that we must continue to work for its ultimate protection. Chesapeake Conservancy is committed to standing with the Rappahannock Tribe as they continue to write the next chapters. 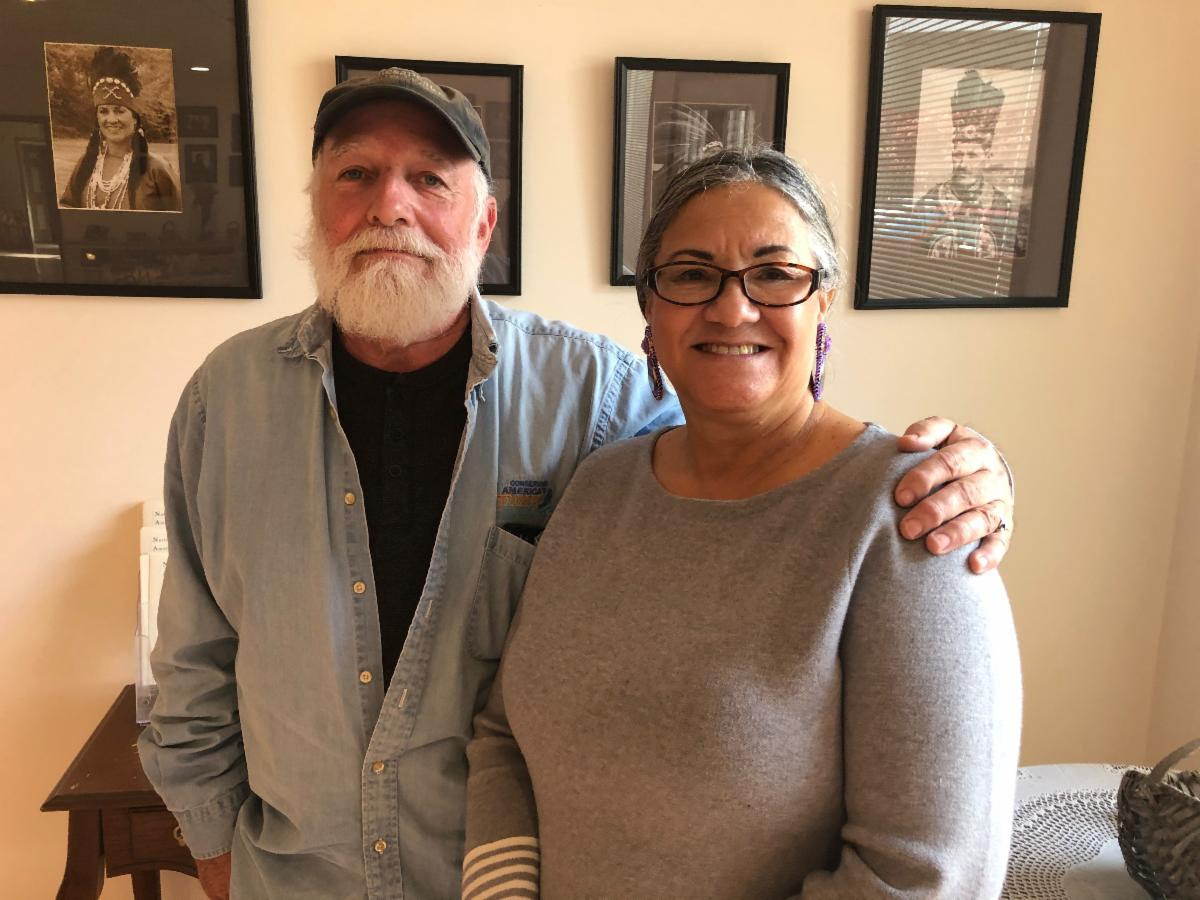 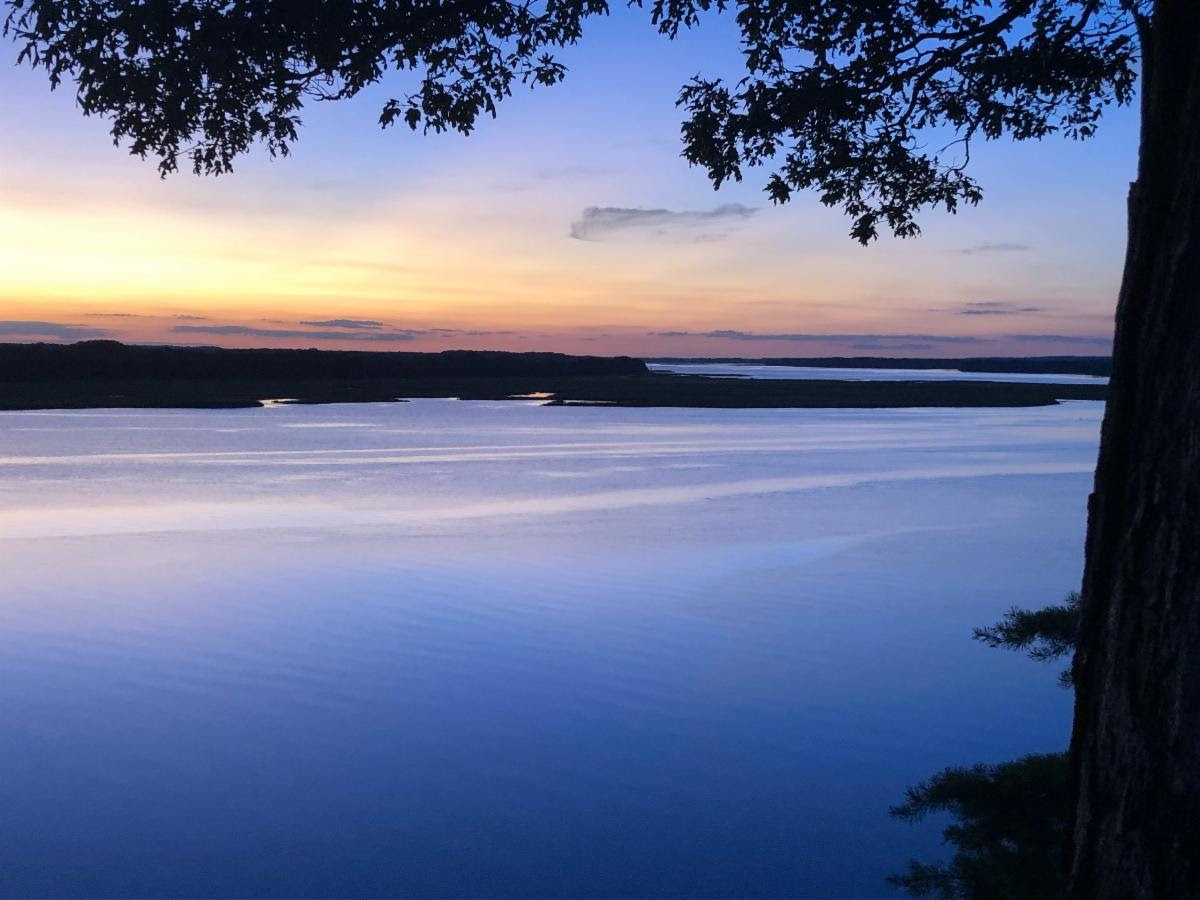