Where the Bay Meets the Ocean 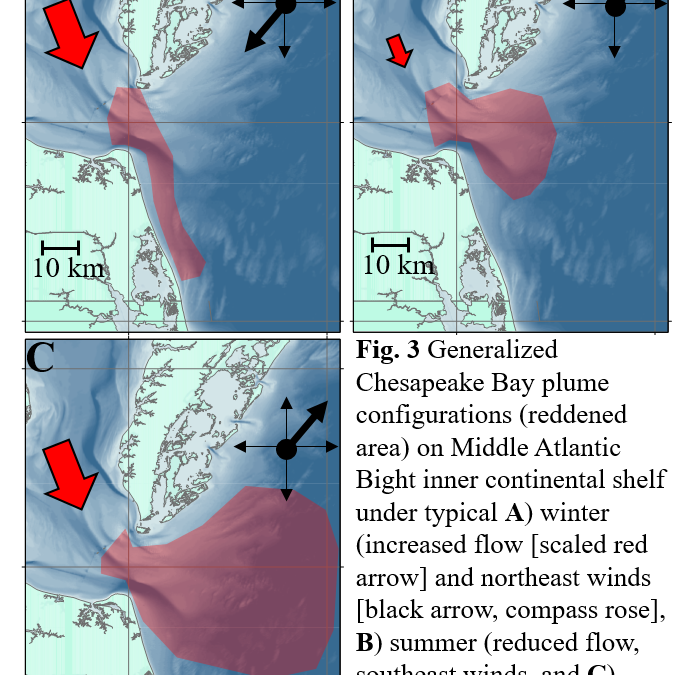 A technical graphic shows the Bay’s outflow plume throughout the year.
Credit: University of Maryland Center for Environmental Science

For several decades the health of the Chesapeake Bay has been understood to be linked to the 64,000 square mile watershed. Scientists, the public, and their elected representatives have grown to understand that what gets deposited on the land, especially nitrogen, phosphorus, animal waste, and other chemicals, finds its way into the water and damages the natural balance of a fragile ecosystem. But then what? The bay is a beloved and vital feature, but it is not the end of the story as most of whatever flows downhill eventually settles on the bay bottom or goes out to sea. While we know a lot about what happens within the bay itself, we don’t know as much about how the bay’s health impacts the ocean along the coast and beyond.

Earlier this year the National Science Foundation announced a $1 million grant to the University of Maryland Center for Environmental Science to study how the plume of the Chesapeake Bay (its outflow at the mouth of the bay where it connects to the ocean) changes over the course of the year and what those changes mean for food webs and nutrient cycles in the coastal Atlantic Ocean.

The project will develop a model of water movements to predict how river flow, winds, and currents converge to cause seasonal changes in plume size, location, and composition. According to project leader Ryan Woodland, the study will:

Expected results will provide benefits to natural resource management through a better understanding of the linkages between plume dynamics, food webs, and fisheries.

In addition to sediments and nutrients, the study is likely to find an increasingly troublesome and persistent product: microplastics. Most plastic that escapes into the environment eventually breaks down into progressively smaller fragments that make their way into waterways. These include tiny pieces of plastic released into the environment from industrial facilities, as well as fabrics and roads, and larger fragments from debris including bags, bottles, and food containers as they slowly degrade.

Previous studies and reports supported by the Chesapeake Bay Program have addressed the prevalence of microplastics in the waters of the bay and the bodies of the creatures, including fish, shellfish, and humans, that inadvertently consume that material. As if we don’t have enough scary challenges to our health, the accumulation of tiny toxic particles is a new concern that extends throughout the planet.

The scope of the problem is truly alarming. According to the advocacy group Oceana, an estimated 33 billion pounds of plastic leaks into the marine environment from land-based sources every year. This is roughly equivalent to dumping two garbage trucks full of plastic into the oceans every minute! The coronavirus pandemic has created even more debris as an estimated 129 billion face masks and 63 million gloves were tossed away each month.

In 2019 the Bay Program established a Plastic Pollution Action Team (PPAT) to develop a preliminary ecological risk assessment model and other tools to promote better understanding of the threats to the Bay from plastic. The PPAT has recommended a monitoring program and produced ideas for reducing plastic pollution at the source, identifying gaps, and prioritizing them, as outlined in their Microplastic Monitoring & Science Strategy for the Chesapeake Bay (May 2021). Development of this scientific strategy was informed by a preliminary ecological risk assessment looking at the effects of microplastics on striped bass in the Potomac River, a waterway shared among bay jurisdictions throughout its tidal and nontidal portions. Stripers, as an apex predator, provide a window into the effects of microplastics on various parts of the food web; and they carry tremendous public interest as an iconic Chesapeake species, popular for recreation and sustenance, with a success story from late 1980’s—and currently imperiled in the Potomac region.

State and local governments have been taking actions to reduce their use of plastics in government facilities. Maryland and Virginia have adopted a plan to end the use of polystyrene food and beverage containers, Pennsylvania is working on a littering action plan, and DC continues to tax plastic bags and uses the proceeds to help clean up waterways.

Regulatory and tax approaches are certainly helpful but as summer gets underway each individual can do their part to reduce plastic pollution. For example, Annapolis Green is promoting plastic free Annapolis and encouraging everyone to get out their reusable bottle instead of relying on a single use plastic one.

They also are highlighting the city’s “No Butts in the Bay!” to encourage disposal of cigarette butts in appropriate receptacles. This action is important because cigarette butts pose a threat to our waterways since they contain toxic plastic that does not biodegrade and is mistaken for food by wildlife. 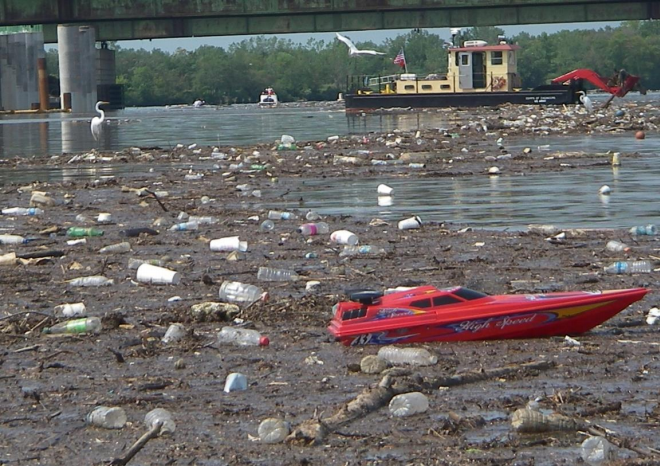 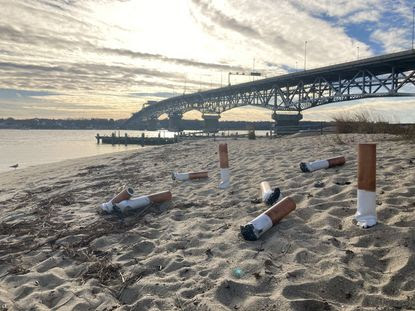 Like Annapolis’s “No Butts in the Bay!” campaign, Hampton, VA has used creative tactics, like these fake cigarettes, to remind people cigarette butts are plastic and harmful to Bay wildlife.
Credit: The Virginian-Pilot

Accumulation of microplastics in striped bass and other aquatic species is an important story to tell. These nasty little particles are finding their way into our water, our food, and our bodies. Further research will document the extent of the problem and the opportunities to reduce the risk to people as well as our environment.

While changing our habits of consumption and use of packaging material is useful, even more promising are industry-wide initiatives. For example, the U.S. Plastics Pact, a collaborative led by The Recycling Partnership and World Wildlife Fund (WWF), launched as part of the Ellen MacArthur Foundation’s global Plastics Pact network. The Pact is an ambitious initiative to unify diverse public-private stakeholders across the plastics value chain to rethink the way we design, use, and reuse plastics, to create a path toward a circular economy for plastic in the United States.

Current and potential future management actions include legislative actions, clean-up practices within and around waterways, and a regional approach that would coordinate actions and policies among jurisdictions. Implementation of the science strategy, including all of these actions, will put us on a path for understanding the impacts of plastic pollution on the ecosystem, our health, and the economy, and how we can work to reduce the effects. There is ample opportunity for public participation at all levels, from changing personal behaviors to pressing for better policies and practices, to community science monitoring efforts. It will take all hands for this very tangible, possible change to happen.